Refugees in Greece find sanctuary in football | Europe| News and current affairs from around the continent | DW | 14.07.2018

As the world gears up for the World Cup final, a grassroots group of volunteers has created its own football movement for refugees in northern Greece. Marianna Karakoulaki and Dimitris Tosidis report from Thessaloniki. 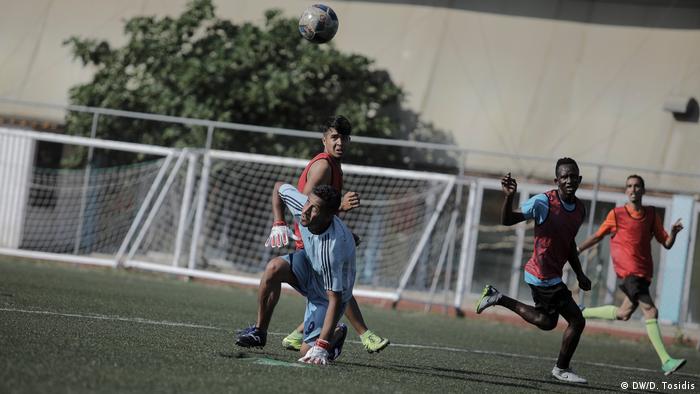 Suleiman, 23, was a professional football player in Damascus where he played for Al-Wahda SC, a premier league team and one of the oldest sports clubs in Syria.

"I have been playing football since I was six years old. I was with Al-Wahda for 10 years but I had to stop due to the war," he told DW.

Suleiman arrived in Greece in 2016 and stayed in the makeshift camp of Idomeni at the Greek-Macedonian border for four months. He was eligible for the EU's relocation scheme but he chose to live in Thessaloniki because it reminded him of his home. Suleiman started working for an NGO as an interpreter and found out about Aniko, a football movement, as its founder Dan Teuma describes it — more than just a sports club or a football team.

Read more: Helping refugees in Greece get facts, not rumors

"I was working with an NGO that supported Aniko during their training and I liked what they did. You're having fun, you're training, and you meet new people," said Suleiman.

Aniko, which means "to belong" in Greek, is a grassroots group created by Dan Teuma and Jess Johnson who started working as volunteers in Calais before heading to Greece in the summer of 2015. After volunteering in Lesbos and Thessaloniki in different roles and capacities, they realized that the situation was a long-term problem and that the needs of refugees were changing. They decided to create a football movement with the aim of helping refugees integrate into the Greek society. In the autumn of 2016 they were joined by Thomas Farines, Aniko's coach, who shared their vision. 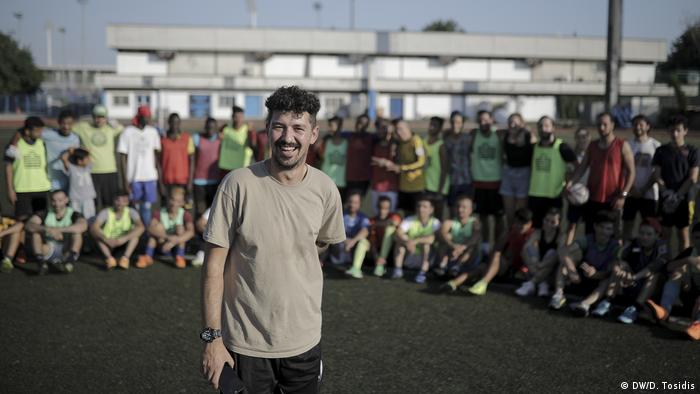 Dan Theuma hopes his project will foster integration and inclusion

"Football builds bridges, it promotes peace. When I moved to England from Gibraltar I was kind of an outsider. Football was my social inclusion and my integration into society in the UK. It worked for me so why can't it work for others?" Teuma told DW.

Football for All is a monthly event that Dan, Jess and Thomas came up with in order to bring people together. The idea was simple: organize an event, open it to the community of Thessaloniki where everyone is welcome. For Dan the event can break down barriers among those in the community and can help them become more active members of society.

Judging by the turn-out on the pitch, it's working. Refugees and locals from Syria, Afghanistan, Iraq, Morocco, Greece, Cameroon, Italy and other countries waited to be sorted into teams. Dan separated them, gave an inspirational talk and the game began.

Aniko's main goal is to bring people from different ethnicities, religions, genders and ages together and make them feel like they belong somewhere. Players were shouting in their own languages but everyone seemed to communicate without any problems. 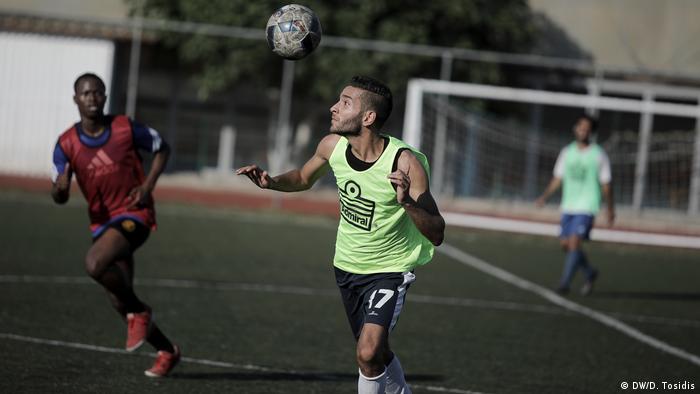 "It is not a problem if you don't understand someone's language. We communicate with our body language," said Suleiman.

Aniko's goal, however, is much more ambitious. Although Football for All is not a new idea, the team behind Aniko plans to upgrade that idea so that it reaches communities globally.

Football as a distraction

Those who play with Aniko see football as an important part of their daily lives. Instead of staying at home and doing nothing, they have the opportunity to go out, meet others and play. Football seems to bring meaning to their current lives, most said.

Narcisse, a 25-year-old refugee from Cameroon, arrived late and waited for halftime to join the game. "Football is a distraction for me. A distraction from my problems. When I play I can sleep well at night," he told DW. Like many others on the pitch, he's waiting for his asylum application decision.

Zitouni, 23, a Berber from Morocco, has been in Greece for five years but he believes his application will be rejected. Despite the daily stress of waiting for a decision, he seems to forget about everything when he plays.

"I am happy when I play football. Especially after joining Aniko because before that I was not doing anything. My time before that was nothing. Now it's full. I have everything with Aniko," he said.

Going for the big time

As a small grassroots movement, Aniko is struggling to secure funding in order to continue their program which involves weekly training and other events. However, they have no intention of stopping, given the difference they've made in people's lives in just a few months. 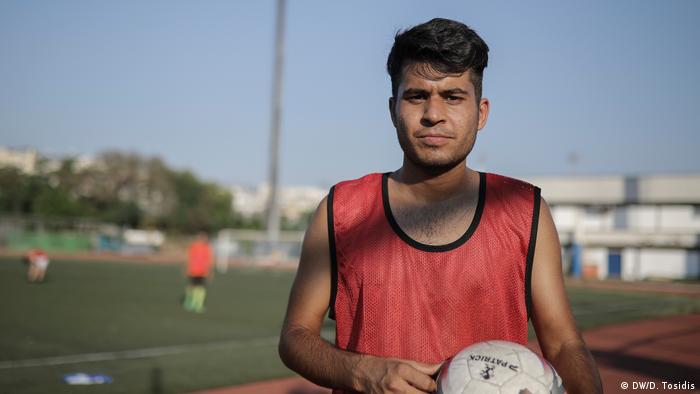 Dreaming big: Mojtaba says he wants to become the best player in the world

Mojtaba, 18, from Afghanistan, has been living in a refugee camp for two years. He has been training with Aniko for six months and has big dreams. He wants to become the best footballer in the world.

"We have to carry on slowly and gradually. I train with Aniko and with another team but my plan is to try and join the Greek team Aris," he said, before running back onto the pitch.

Joining a Greek professional team is not easy simply because refugees don't have the right papers that the football association demands — particularly those who have not yet been granted asylum. However, Suleiman will soon join Iraklis, one of the oldest and most traditional teams of Thessaloniki.

Football as a bridge between cultures