Beirut's League of the Camps

For more than a decade, refugees have been playing football against each other in the League of the Camps in Beirut. What was once an all-Palestinian league has come to include many Syrians in recent years. 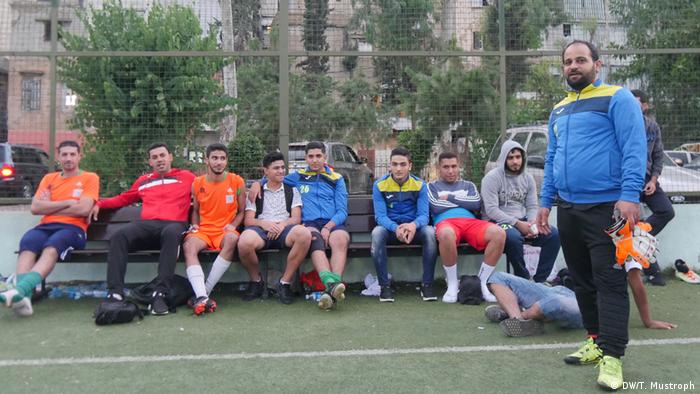 The League of the Camps was founded in the Lebanese capital Beirut by six teams made up of Palestinian refugees in 2004.

"Now we are more than a dozen. There are teams from Shatila, Sabra, Bourj el-Barajneh," says Tarek, who has been the coach of Karmel 1969 of the Shatila refugee camp for more than 20 years.

"I've seen them all grow up," he laughs, as he points to a group of men and boys who have gathered around him.

Twenty-eight-year-old Mutaz is a truck driver who was born in Shatila, as was 18-year-old Mohammed, who is enrolled at a school for gastronomy. A third, Omar, declines to say how old he is or what he does for a living. His life is all about football, he says, as the others nod in agreement.

Dreams of a professional career shattered

The burly guy with the goalkeeper's gloves is also named Mohammed (pictured above, right), but he's not from Shatila. 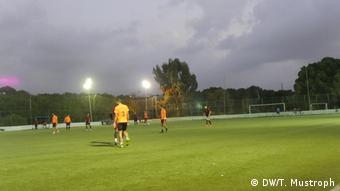 A league match under the floodlights on the main pitch

"Our goalkeeper comes from Raqqa in Syria," Tarek says, translating what Mohammed has just said in Arabic into English.

When he was younger, Mohammed had hoped to make a career of football in Syria's first division, but those dreams were shattered when the war and the so-called "Islamic State" came along. Now he lives in a flat on the outskirts of Shatila and makes ends meet by working on construction sites. On Sundays, though, he plays football.

Mohammed is one of many Syrians who now play in what was founded as a strictly Palestinian league, and he is one of five Syrians who play for Karmel 1969.

"It's all very harmonious," Tarek says. "We live together in and around the camp. We love football and we play together."

As far as he knows, there are still no all-Syrian teams in the league, but this may just be a matter of time.

Shatila was originally set up by the International Committee of the Red Cross in 1949 to house Palestinian refugees. It is currently home to an estimated 23,000 Palestinians, but an influx of Syrian refugees has seen the population of the camp climb to around 50,000 since President Bashar al-Assad moved to put down a revolt against his rule in 2011.

What was originally meant to be a temporary camp has since grown into a small city with buildings jammed together for a stretch of about 1.5 kilometers (almost a mile). Due to the increasing need for accommodation, additional floors have been added to the structures over the years, using whatever material was available at the time. Some of them now stretch up to seven or eight floors. 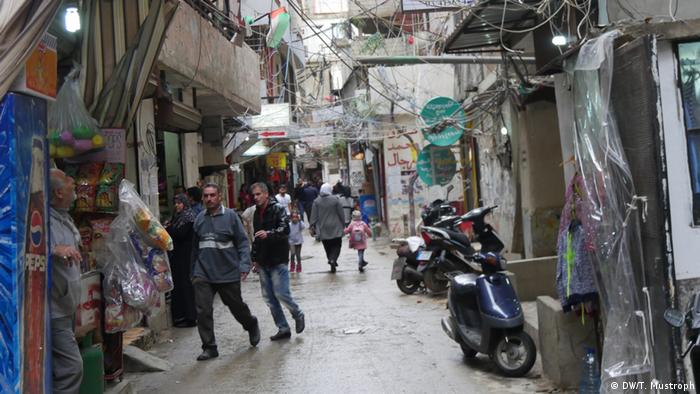 Since it was opened by the ICRC in 1949, Shatila has grown into a small city

The streets are so narrow that playing football here is virtually impossible. However, once a week, the non-governmental organization (NGO) GAME Lebanon puts on a Street Soccer Camp at a small football ground in Shatila. The ground is protected by a high fence and the gate is secured by a bike lock. It's a beautiful little artificial-turf pitch, complete with all of the customary white markings. But nobody is actually playing here.

"If you want to see somebody playing, you should come back after 4 p.m. or 6 p.m. That's when the first ones to register show up," says Mohammed, who was friendly enough to open the gate. He is careful to lock it up again afterwards.

"You have to pay $20 (€16.8) per hour. Then you can play there," Karmel coach Tarek says. "We can only afford to pay for one hour per week on the small pitch in the camp for the children's team and one hour for the men. We play with five players and a goalkeeper per side. It's so expensive!"

It is the city that looks after the pitch and charges the fees. "That's Lebanon," Tarek says as he shrugs his shoulders.

The situation is absurd. NGOs fund sporting events for children and adolescents in the camps, but this small pitch exists behind a paywall. Because using it is so expensive, the NGO Basmeh & Zeitooneh has built a small sports facility on the roof of a nearby school that it operates. 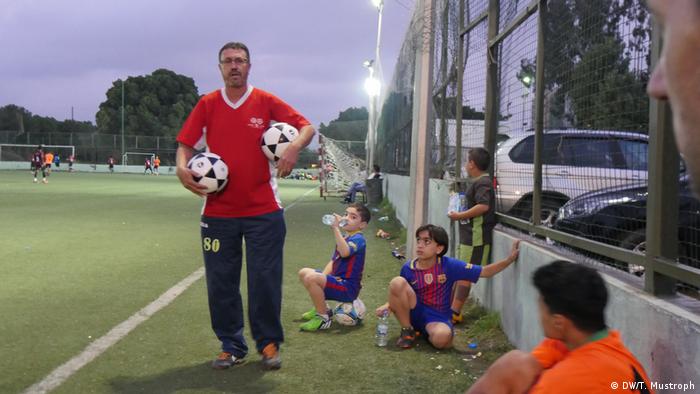 Floodlights for every field

Fortunately, though, the refugees have access to the big field across from their camp, where the League of the Camps is in action every Sunday.

"The use of the field is free, and the Lebanese are cooperative," Tarek says.

There are about 12 smaller fields that surround the big one and all are outfitted with floodlights. Lebanese recreational teams take to the pitch alongside refugees from Asia and Africa, where they play out their own World Cups every day. All of the pitches are full of Messi, Ronaldo and Neymar jerseys, but you can also spot the odd Schweinsteiger.

Things are different in the League of Camps, where every team has its own jerseys. You can sense the respect the boys who play for Karmel's youth team have when they take off their Messi, Neymar or CR-7 shirts and pull on their own club's jersey. After all, what's a Barcelona shirt worth when compared to one from Karmel 1969 Shatila?