Reconstruction of Stuttgart railway station begins amid protests | Germany| News and in-depth reporting from Berlin and beyond | DW | 13.08.2010

Dismantling of Stuttgart's main rail station has begun amid protests against the controversial "Stuttgart 21" construction project. Thousands demonstrated against the opening of the four-billion-euro plan. 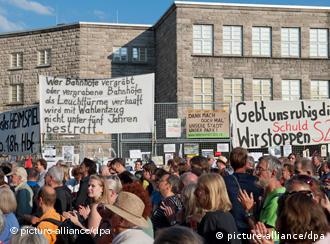 Normally calm Stuttgart has been rife with protest

Thousands of people in the western German city of Stuttgart came out in protest on Friday against the destruction of the city's main train station.

Huge cranes and other construction vehicles had arrived in the early morning hours - accompanied by dozens of police - to begin dismantling the facade of the northern wing.

Some 20 activists attempted to blockade the construction zone but were escorted away by police. Others, according to a police spokesman, were heard insulting the workers and disturbing them with noisemakers. 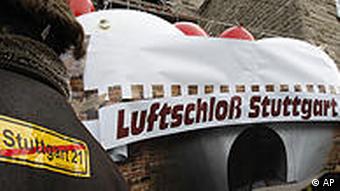 The protests were directed against the so-called "Stuttgart 21" project which entails a huge transformation of the main rail terminus into an underground facility within the next nine years.

The redevelopment will replace the station's dead-end tracks with through lines in a bid to streamline connections between Paris and Vienna, which, according to the project's slogan, will turn Stuttgart into "the new heart of Europe."

Those opposed to Stuttgart 21, meanwhile, see the project as a massive waste of money, referring to it not as the new heart of Europe, but rather as the Milliardenloch, or "billion-euro hole."

When the project was agreed in 1995, the new station was expected to cost 2.6 billion euros ($3.3 billion), to be shared by Germany's national rail operator, Deutsche Bahn, the city of Stuttgart, and the federal government.

That original estimate has been raised several times since, with costs for the project now expected to amount to 4.1 billion euros - a sum many fear will continue to rise.

Well over half of the city's population is against Stuttgart 21, with a public opinion poll by the Stuttgarter Nachrichten newspaper showing close to 65 percent would vote to stop the project if it were put to a referendum. 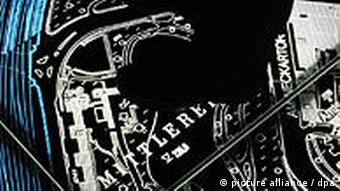 The new main station will allow for through traffic

But that's no longer possible, as the city of Stuttgart is not solely responsible for the project or for its costs.

Gangolf Stocker, who heads the initiative "Living in Stuttgart" that supports and organizes weekly protests against the reconstruction plans, told Deutsche Welle that it was "extremely undemocratic" that the people of Stuttgart were not allowed to influence the development of their city.

"This must be stopped: It's that simple," Stocker said. "The future of our city is being determined by a few individuals who are using the people to achieve their own personal motives. And they've been lying about the costs from the very beginning. We haven't seen the last of the 'readjustments'. We think it will reach at least eight billion euros. And that's eight billion euros for nothing."

Criticism of the project does not stop at its escalating costs, however. Thousands of citizens have also objected to ecological ramifications that include the reduction of a main park near the station and the chopping down of nearly 300 trees.

Over 19,000 citizens in Stuttgart have joined a group to protect the Schlossgarten park from being reduced in size and to prevent the trees located on the grounds from being destroyed. 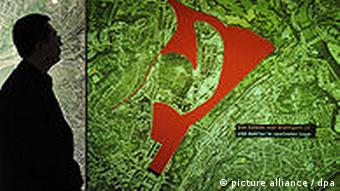 Opponents are enraged by more than just high costs

The members of the group are also worried that the construction project could result in damage to the city's water supply and nearby mineral sources, with millions of cubic meters of water required for completion.

Stuttgart 21 'can no longer be stopped'

But in the face of the protests, which have lingered for years in Stuttgart, a city known for its wealth, prosperity and order, officials are determined to push the project through.

Stuttgart mayor Wolfgang Schuster was quoted in the Stuttgarter Nachrichten as saying a moratorium was "unthinkable," given the time, energy, and money already invested.

He added that those opposed should "not forget that [Stuttgart 21] is both democratic and legal. Parliaments on all political levels, and the people of Stuttgart, passed the project in 1995."

Schuster was given vocal support on Wednesday by Tanja Goenner, the transport minister of Baden-Wuerttemberg, the state of which Stuttgart is the capital.

"We believe that this is a very decisive infrastructure project for the future of our state, and for this reason we will not back down," Goenner said on Friday in Stuttgart, even as protestors gathered at the station in an equally dogged mood.

Europe is wilting under scorching temperatures this weekend, with authorities linking several deaths to the heat wave. Meanwhile Germany's rail operator evacuated three high-speed trains on Sunday due to overheating. (11.07.2010)