Questions remain over Kazakhstan′s fitness for OSCE chair | World| Breaking news and perspectives from around the globe | DW | 04.01.2010

Kazakhstan has taken over the chairmanship of Europe's top security body. But many question whether the Central Asian country, with its weak record on human rights and basic freedoms, should even have the job. 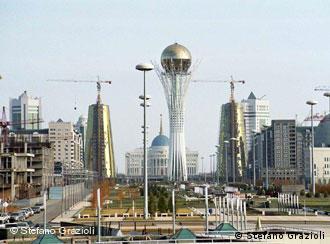 Kazakhstan's new capital may be gleaming, but the country's human rights record isn't

At state-run Radio Astana in the Kazakh capital, journalists choosing the stories to cover in their newscasts at the top of the hour have some of their work done for them. Even before the newscasts air, listeners know, at least partly, what to expect.

The first story will almost always be about Kazakhstan's president, Nursultan Nazarbayev, and invariably positive. The second item will cover the government - a program, a parliamentary vote or an election - which will also be presented in glowing terms.

Only then do journalists have the freedom to broadcast what they think are the newsworthy items of the day.

These and other kinds of restrictions handed down by the government that weaken not only journalism, but freedom of assembly, religion and free elections, have many doubting the wisdom of making the country the 2010 chair of the Organization for Security and Economic Cooperation (OSCE), Europe's top security body and democratic watchdog.

"Clearly there is a challenge for the incoming chairmanship, whether it will be able to lead by example," Janez Lenarcic, head of the OSCE's Office for Democratic Institutions and Human Rights, told journalists at the end of the group's recent two-day meeting in Athens as the Central Asian nation prepared to take over the reins from Greece.

"We are trying to help Kazakhstan move in the right direction," Lenarcic said.

But the signs are not good, according to human rights groups, who say while Kazakhstan made promises to move forward with democratic reforms when it was awarded the chairmanship in 2007, movement since then has been in the other direction. 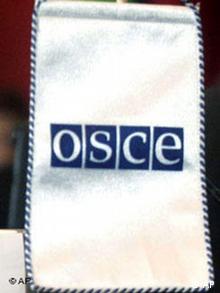 The OSCE's choice of a country with a poor rights record could undermine its credibility, observers say

"Kazakhstan is keen on ingratiating itself with the international community," Jacqueline Hale, a policy officer for Central Asia at the Open Society Institute, told Deutsche Welle. "At the same time, it hasn't met the commitments that the former foreign minister made in Madrid when they got the chairmanship."

Kazakhstan, which has never held an election observers deemed free and fair, promised to bring its legislation in line with the standards of the OSCE. But while rights groups say Kazakhstan did make some modest human-rights improvements in 2009, "mini-steps forward," according to Andrea Berg of Human Rights Watch, more recently, the country has been backsliding.

Last summer a law was passed that tightened control over the Internet in a way that observers say is aimed at government critics and will hurt free speech. Political opposition is regularly curtailed and freedom of assembly is severely restricted.

One of the country's leading human rights activists, Yevgeny Zhovtis, was convicted last September of vehicular manslaughter and sentenced to four years in jail in a trail that appeared to many to be politically motivated. A new law on invasion of privacy will make it more difficult for independent journalists to work.

"There have been a lot of promises, but in reality, the situation has gotten worse," Berg told Deutsche Welle.

A matter of time

Kazakhstan says it will stay true to OSCE principles and the group's three "dimensions," politico-military, economic and environment and the human dimension, which includes human rights.

In a statement from the Kazakh embassy in Berlin, officials said the country's chairmanship will focus on disarmament, East-West relations, interreligious and intercultural tolerance and the stabilization of Afghanistan.

"In our opinion, the chairmanship of Kazakhstan will contribute to dialog on the entire Eurasian continent and correspondingly, intensify cooperation between Central Asia and Europe," the statement read.

When pressed on human rights matters, Kazakhstan officials have argued the country is doing the best it can to bring its institutions up to western standards, saying the reforms are coming at a pace that will not threaten the country's stability.

"If you want to get the UK's level you must take a very rapid lift which will raise your blood pressure, it will affect the body," Adil Akhmetov, a Kazakh OSCE official, told reporters. "We should be very careful." 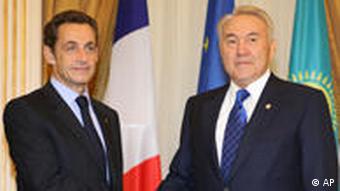 President Nazarbayev, who has been in power since the breakup of the Soviet Union 1991 and enjoys something of a cult of personality, has rebuffed criticism of human rights abuses as a "distortion." In a joint press conference with France's Nicolas Sarkozy in early October of last year, he said while Kazakhstan was open to criticism, it was determined to follow its "own path."

Kazakh leaders often have talked about the relative youth of their democracy and the need for more time to bring it up to western levels. But Andrea Berg of Human Rights Watch said those arguments disappear whenever the subject in this oil-rich nation turns to its business and energy sectors.

"In these areas, they want to be a full-fledged member of the international community," she said.

Rights groups have expressed disappointment that the West has not been more forceful with Kazakhstan on the issue of freedoms and human rights, which appear to have taken a back seat to economic concerns. China, observers say, is a leading example of this. 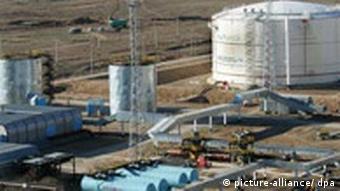 Kazakhstan is rich in oil and natural gas reserves

Many suspect Kazakhstan's vast oil and natural gas reserves play a role in the softer approach as the West, and western Europe in particular, look for new sources of energy.

The need for energy resources, worries about Afghanistan and regional security, and a general sense that the West has not been present in this long-ignored part of the world have led western leaders to want to engage, rather than isolate, despite spotty rights records.

That is generally positive, said the Open Society Institute's Hale, although she warned about going too far.

"There is no clear sense of what the engagement will bring, and the costs of this engagement," she added. "Some western European countries are seeking to ingratiate themselves to these regimes without a clear request for anything in return."

In an attempt to reduce their reliance on Russian gas, EU leaders have met with colleagues from the so-called "New Silk Road" in Prague to discuss building new pipelines. (08.05.2009)

The head of the Organization for Security and Cooperation in Europe called a two-day summit "successful" even though a joint political declaration eluded delegates and tension between Russia and the West increased. (05.12.2008)

A German initiative to strengthen European ties to resource-rich Central Asia begins to bear fruit. Representatives from the two regions will meet to discuss possible cooperation on energy security. (18.09.2008)