Qatar's foreign minister has said that his country welcomes efforts to calm the current Gulf diplomatic crisis. However, Qatar's foreign policy is not up for debate. 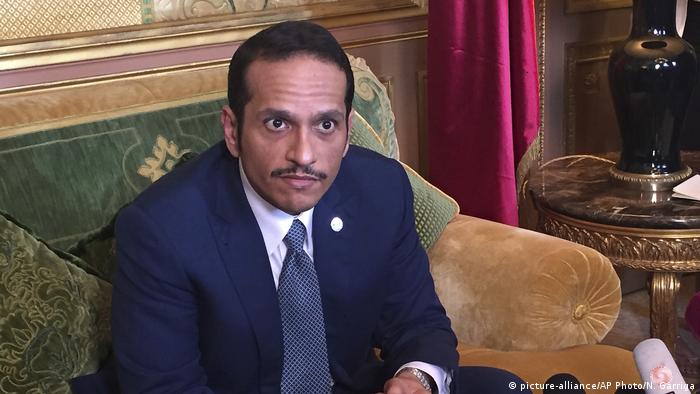 While in Paris on Monday, Qatar's Foreign Minister Sheikh Mohammed bin Abdulrahman Al Thani decried the sanctions against Doha by several Gulf countries, but said his country was open to diplomatic efforts to calm the situation.

"Qatar is willing to sit and negotiate about whatever is related to Gulf security," Sheikh Mohammed told a news conference in Paris following diplomatic meetings.

He called for "dialogue based on clear foundations" over accusations from Saudi Arabia and its allies that Doha supports extremist groups. The minister also said that Qatar supports Kuwait's mediation efforts.

Read more: Why Turkey is standing behind Qatar in the Gulf crisis

The foreign minister said that although Qatar was open to dialogue, its foreign policy would not be up for debate in any talks.

"Whatever relates to our foreign affairs... no one has the right to discuss," Sheikh Mohammed said. He also said that no one could pressure Qatar to silence the TV network Al Jazeera based in Doha.

"It's not about Iran or Al Jazeera," he said, referring to the Doha-based broadcaster. "We have no clue about the real reasons."

In an interview with Al Jazeera English on Monday, Qatar's economy minister said that despite the tensions, the small Gulf state would be able to maintain a high standard of living for its residents.

Economy Minister Ahmed bin Jassim Al Thani told the Qatar-funded channel that the country had a one-year reserve of materials for major construction projects - including the building of stadiums for the 2022 World Cup.

Both the foreign and economy ministers of Qatar are members of the Qatari royal family under Sheikh Tamim bin Hamad Al Thani's absolute monarchy, which is yet to realize reforms dating back to 2003 aiming to adopt a constitutional monarchy in Qatar.

Iran delivers food to Qatar amid concerns of shortages

Iran has sent cargo planes laden with vegetables and fruits to Qatar as the Gulf country faces a food shortage. Saudi Arabia, the UAE, Bahrain and Egypt cut ties with Qatar over its alleged links with terrorist groups. (11.06.2017)