Putin: Ouster of Ukrainian president was an 'unconstitutional coup'

Russian President Vladimir Putin has said the ouster of the Ukrainian president was an "unconstitutional coup." He has denied sending in troops, however, saying "local forces" were operating in Crimea. 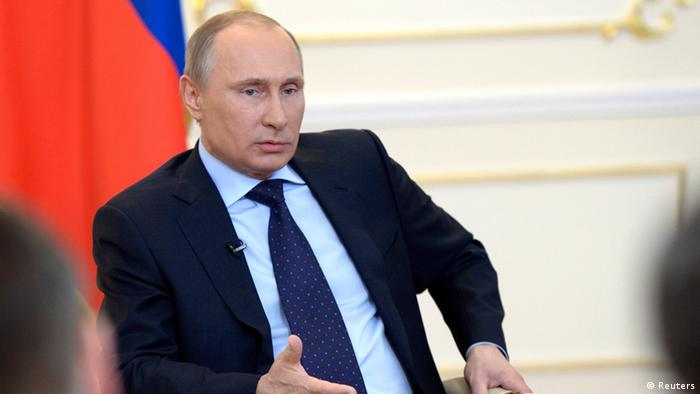 Putin slammed the ouster of former president Viktor Yanukovych on Tuesday in a live television address from Moscow.

"There can be one assessment of what happened in Kyiv and Ukraine as a whole. This was an anti-constitutional takeover and armed seizure of power," the president said.

They were his first comments since Ukraine's new interim leaders accused Russia of sending an estimated 16,000 troops into Ukraine's Crimea peninsula. The alleged military deployment has created the toughest test to diplomatic relations between the West and Russia since the fall of the Berlin Wall in 1989.

Putin denied that the Russian military was operating in the region, saying only "local forces of self-defense" have surrounded Ukrainian military bases.

Asked if Russian forces took part in operations in Crimea he said, "No, they did not participate," adding: "There are lots of uniforms that look similar."

He added that he currently saw no need for Russian military involvement, although he reserved the right to use all means to protect Russians in the country.

The interim government in Kyiv took control earlier this month after Yanukovych was ousted following three months of protests.

Putin said Yanukovych, who fled to Russia, remains the only legitimate leader of Ukraine. However he admitted the former president had no political future.

He said he saw Yanukoych two days ago and he was "safe and sound," denying rumors he had died of a heart attack.

Putin's comments came after a Kremlin aide warned that Russia may be forced to stop using the dollar for international transactions if Washington acts on its sanctions threat.

"We would find a way not just to reduce our dependency on the United States to zero but to emerge from those sanctions with great benefits for ourselves," Glazyev said.

In a separate warning to the European Union he said Russia could halt gas supplies "which would be beneficial for the Americans" and give the Russian economy a useful "impulse."

Although not responsible for making policy, many see Glazyev's hand in Russia's apparent radicalized stance on Ukraine.

The warning comes a day after US President Barack Obama threatened a series of diplomatic and economic steps to "isolate Russia and have a negative impact on the Russian economy" unless President Putin withdraws armed forces from Crimea.

It also suspended all military engagements with Russia, including military exercises and port visits.

European Union foreign ministers also stepped up diplomatic pressure, threatening to suspend negotiations over visa liberalization and issuing a Thursday deadline for the withdrawal of troops.

Russia, which doesn't recognize the new government in Kyiv, reported Monday that Yanukovych had requested Russian help following his ouster earlier this month.

Russia's ambassador to the UN, Vitaly Churkin displayed a letter at the UN Security Council on Monday, claiming Yanukovych had requested assistance to "restore law and order."

"Under the influence of Western countries, there are open acts of terror and violence," Russia's ambassador to the UN, Vitaly Churkin read aloud from the document.

"People are being persecuted for language and political reasons. So in this regard I would call on the president of Russia, Mr. Putin, asking him to use the armed forces of the Russian Federation to establish legitimacy, peace, law and order, stability and to defend the people of Ukraine."

The US and UK immediately dismissed the claim, calling the maneuvers "a response to an imaginary threat."

The new Ukrainian government, meanwhile, has said the military deployment amounts to an invasion.

US Secretary of State John Kerry has landed in Ukraine in a show of support for the interim leaders.

Separately, Russia is reported to have ordered troops participating in military exercises near the Ukrainian border back to their barracks, giving some relief to markets which have been hit by escalating tensions.

On Monday Russia's MICEX stock index shed 10.8 percent of its value and the ruble currency fell to record lows against the euro and the dollar.

Germany's DAX was down 3.4 percent on the day, suffering more than Paris' CAC 40 and London's FTSE 100. In the US, all three major indices were able to contain daily losses within 1 percentage point.