Russian parliament approves use of armed forces in Crimea

Russia's parliament has approved the use of armed forces in Ukraine's Crimean peninsula. Western leaders expressed concern with the move, which President Vladimir Putin said was to protect ethnic Russians in the region. 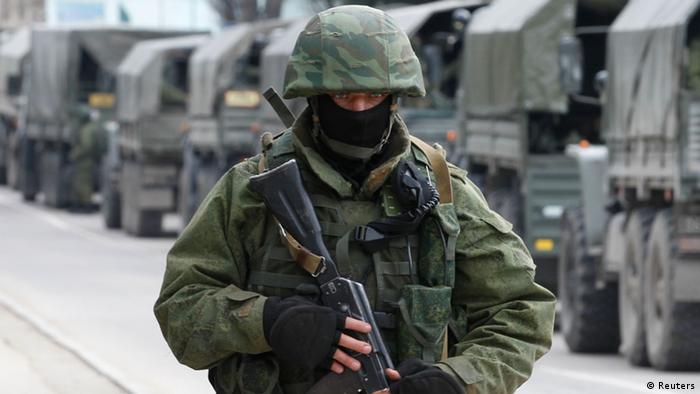 Russia's upper house of parliament, the Federation Council, unanimously approved the motion on Saturday after Putin had submitted the proposal. The chamber announced that the decision would go into effect immediately, and also recommended that Russia's ambassador to the United States be recalled over comments by President Barack Obama.

Putin said the action, which he said he took to protect ethnic Russians and military personnel in the region, was necessary until the political situation in Ukraine stabilized. Using Russian armed forces abroad only requires approval from the Federation Council. No preliminary OK is necessary from the lower house of parliament, the Duma.

Putin said that military involvement on the the peninsula will depend on how the situation on the ground unfolds and that no decision on sending forces to Crimea had been made.

"We hope that the situation won't develop as it does now, that is further escalation that threatens the ethnic Russians on the Crimean peninsula," said Putin's spokesman, Dmitry Peskov.

Crimea's pro-Russian Prime Minister Sergei Aksyonov had earlier asked Moscow for help in restoring calm the region, after claiming control of the military and police there. The appeal was followed by the Duma's calling on Putin to "stabilize" the crisis in Crimea using all means possible.

On Friday armed men described as Russian soldiers took control of key airports and a communications center in Crimea. Ukraine's new pro-Western government has accused Russia of a "military invasion and occupation" in the region, which is where Moscow's Black Sea Fleet is based.

In response to Russia's approval of the use of armed forces, interim President Oleksandr Turchynov said he had put Ukraine's military on high alert. Flanked by Prime Minister Arseniy Yatsenyuk in a television address, Turchynov said he had increased security around nuclear facilities, airports and other "strategic locations."

He added an "action plan" had been put in place "in case of aggression."

Yatsenyuk said he had urged Russia to send its troops in Crimea back to their base in a telephone call with his Russian counterpart, Dmitry Medvedev.

"Military intervention would be the beginning of the war and the end of any relations between Ukraine and Russia," Yatsenyuk said.

Western leaders have urged Ukraine and Russia to avoid taking action that could spark a military conflict. Britain's ambassador to the UN, Mark Lyall Grant, wrote on Twitter that the Council hosted an emergency meeting at London's request Saturday night.

UN Secretary-General Ban Ki-moon is "gravely concerned" over the escalating tension in Ukraine, according to spokesman Martin Nesirky. "He calls for an immediate restoration of calm and direct dialogue between all concerned to solve the current crisis," Nesirky said.

"The unity, sovereignty and territorial integrity of Ukraine must be respected at all times and by all sides," she said. "Any violation of these principles is unacceptable. More than ever, restraint and sense of responsibility are needed."

Obama had warned Friday that "there will be costs" if Russia intervened militarily in Ukraine. On Saturday, a Russian lawmaker said in the Federation Council's emergency session that the US president's remarks had crossed a "red line." Parliament then recommended that Moscow recall its ambassador to Washington, a decision that is ultimately up to Putin.

Ukraine has been deeply divided since protests broke out in November following then-President Viktor Yanukovych's decision to reject an EU trade deal in favor of strengthening ties with Russia. Increased protests last week culminated in Yanukovych's stepping down from office and fleeing the country.

Pro-Russia demonstrations have since been held around Ukraine. On Saturday, several thousand protesters clashed with supporters of Ukraine's interim government, who were guarding Kharkhiv's city hall. The pro-Moscow protesters took city hall, raising the Russian flag over the building. Dozens of people were reportedly injured in the violence.

Ukrainian TV and news agencies also reported rallies in Donetsk and Odessa, which along with Kharkhiv have large Russian-speaking populations.

There are indications that the crisis in Ukraine’s southern Crimea region is escalating. The new premier of the region has said that armed men guarding key buildings are from Russia’s Black Sea Fleet. (01.03.2014)

The situation in Crimea is getting more dramatic by the hour. Russian President Putin has apparently sent troops to the peninsula. Ukraine expert Andreas Umland tells DW that separatists are gaining ground. (01.03.2014)

Russian President Vladimir Putin's strategy for the Ukrainian conflict is clear. As a result, Ukraine's new government and the West are in a dangerous jam, writes DW's Ingo Mannteufel. (01.03.2014)

Ukraine: a look back at some of the main events