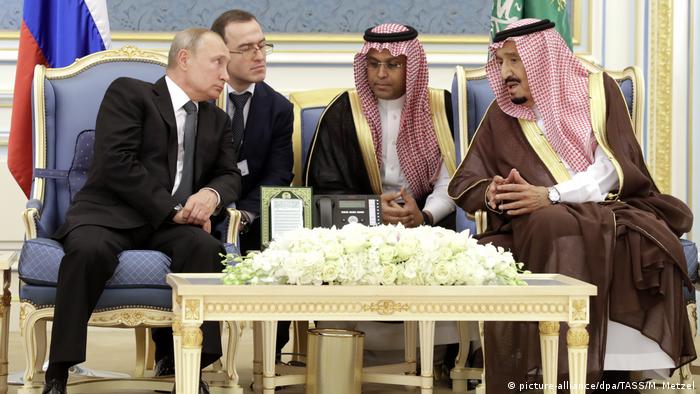 Russian President Vladimir Putin arrived in Saudi Arabia on Monday for his first visit to the kingdom in over a decade. Putin is seeking trade and investment opportunities in the region, where Russian influence has grown in recent years.

Saudi Arabia and neighbor the United Arab Emirates (UAE) are likewise interested in Russian ventures that could help the Arab countries diversify their oil-dependent economies. Putin will visit the UAE on Tuesday.

New investments are essential for the Russian economy, which continues to suffer under sanctions related to the country's military action in Ukraine and the low price of Russian oil, a key export. It is likely that Russia will not meet its economic growth goals for 2019.

Russia's sovereign wealth fund is expected to come away from the visit with deals worth more than $2 billion. Saudi Arabia, meanwhile, is after assistance in launching a satellite.

Seeking to mediate between Saudis and Iran

Russia and Saudi Arabia, a long-standing ally of Washington, have enjoyed a notable rapprochement in recent years, marked in particular by King Salman's first visit to Russia in October 2017.

Putin's tour is seen as a chance for Russia to deepen cooperation on energy and oil and to drum up investment from the Saudis, but also to underline Russia's growing influence and interest in the Middle East.

The national flags of both countries lined the streets of Riyadh as the one-day visit got underway. Putin was accompanied for the trip by his energy minister and the head of Russia's sovereign wealth fund.

Speaking ahead of the trip, in an interview with Saudi-owned Al Arabiya television, Putin expressed a wish to ease tensions between Tehran and Riyadh.

Russia has been successful in strengthening relations with both Sunni Muslim Saudi Arabia and its Shiite rival Iran. Moscow has also accrued power in the Middle East by sending troops to Syria, where it backs President Bashar Assad in the country's civil war.

No 'negative impact' on US ties

It's unclear whether there will be movement on Saudi plans to buy the Russian S-400 surface-to-air missile system — a development that could stir up more unease in Washington.

The Saudis, along with the US, blamed Iran for drone and missile strikes in September. Those attacks rattled oil markets and exposed weaknesses in Saudi air defense systems.

When asked about concerns in the US that Riyadh was cozying up to Moscow, Saudi Minister of State for Foreign Affairs Adel al-Jubeir said he saw no issue.

Foreign troops should leave Syria once terrorists are defeated and security reestablished, Russia's Vladimir Putin has said at a peace summit in Ankara. Turkey and Russia are at odds over a regime offensive in Idlib. (16.09.2019)

Saudi King Salman is in Moscow with a delegation that includes domestic military and oil experts. It is the first-ever visit by a sitting Saudi monarch to Russia. (05.10.2017)