Putin calls for talks on 'statehood' for eastern Ukraine

Russian President Vladimir Putin has appealed for immediate "substantive talks" on the future status of eastern Ukraine. Meanwhile, separatists in the country's east are preparing an offensive on a major port city. 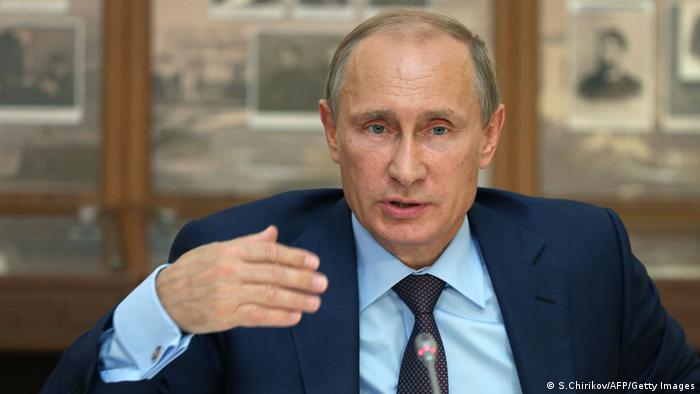 Speaking on Russian TV network Channel 1, Putin said the talks should focus on "questions of the political organization of society and statehood for southeastern Ukraine" with a goal of "protecting the lawful interests of the people who live there."

His comments come after EU leaders agreed on Saturday to prepare tougher sanctions against Russia over its role in eastern Ukraine, where pro-Kremlin separatists have been battling government forces since the beginning of April. Almost 2,600 people have died in the conflict so far.

Kyiv has long accused Russia of supporting the rebels by sending troops and military equipment over the border; a claim Moscow denies.

During his TV appearance, Putin blamed the West for the Ukraine crisis, and said it was impossible to predict how long the fighting would last.

"It largely depends on the political will of current Ukrainian authorities. They should have known that Russia cannot stand aside when people are being shot almost at point-blank," he said.

Russia has previously pushed for more powers to be given to Ukraine's predominantly Russian-speaking eastern regions. However, Putin's use of the word "statehood" does not mean he "envisions sovereignty for the two separatist eastern regions," his spokesman Dmitry Peskov said, according to a Russian news report quoted by the Associated Press news agency.

Meanwhile, pro-Russian separatists have made significant gains along Ukraine's southeastern Azov Sea coast in recent days, a feat Kyiv alleges was only made possible by direct Russian intervention.

On Wednesday, rebels seized the town of Novoazovsk, and on Sunday they were preparing to launch a fresh assault on the strategic port city of Mariupol - the last big town in the region still under Ukrainian control.

Government soldiers and local residents spent the morning reinforcing barricades in the city of nearly 500,000 people. Many locals have also made the decision to leave.

In a separate incident, media reported on Sunday morning that a prisoner swap had taken place on Ukraine's northeastern frontier with Russia. At least 10 Russian paratroopers were reportedly exchanged for 63 Ukrainian soldiers who had crossed the border last week.

Ukrainian President Petro Poroshenko on Saturday met European leaders in Brussels, where he raised fears that his country was "close to the point of no return" and a "full-scale war."

Following a summit with the EU's 28 heads of state, EU President Herman Van Rompuy said on Sunday leaders had agreed to prepare stronger sanctions against Russia if Moscow did not curb its support for the rebels.

"Everybody is fully aware that we have to act quickly given the evolution on the ground and the tragic loss of life of the last days," he said.

Fresh talks on the Ukraine crisis, involving representatives of Kyiv, Moscow and the Organization for Security and Cooperation in Europe, are expected to be held in the Belarusian capital, Minsk, on Monday.

The calls for sanctions to be toughened on Russia over its actions in Ukraine are growing in intensity. But European Union leaders say they are looking for a political deal to resolve the Ukrainian crisis. (30.08.2014)