NATO warns of ′significant escalation′ in Ukraine | Europe| News and current affairs from around the continent | DW | 29.08.2014

At least 1,000 Russian troops have advanced into Ukraine, NATO has said. While the alliance wants to increase its military presence in the Baltic states, the EU is due to meet to discuss stepping up sanctions. 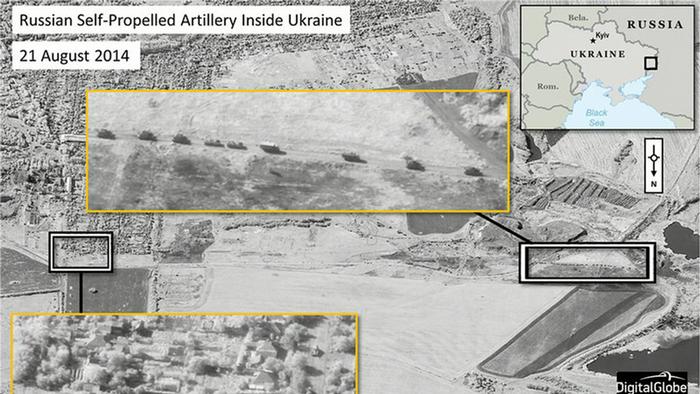 NATO's top commander in Europe, US Air Force Gen. Philip Breedlove, invited journalists to a briefing at the alliance's headquarters ahead of a NATO summit in Wales next week, but had to cancel his press conference when tensions heightened in Ukraine. Breedlove didn't issue an official statement, but a high-ranking NATO military official said on the condition of anonymity that Russian troops advancing on Ukrainian territory was "a significant escalation." He confirmed that at least 1,000 Russian troops have been deployed to Ukraine. 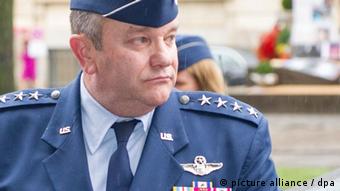 "Russian soldiers fight with separatists and among separatists," the NATO official said. The figure of 1,000 was a rather careful, conservative estimate, he added.

A Ukrainian military spokesperson has accused Russia of deploying tanks - so far, NATO wasn't able to confirm this information. However, the alliance said it had noticed increased activity on the Russian-Ukrainian border in the past two weeks. Russia apparently tried to create a second front line for the Ukrainian army in order to help the separatists, the NATO official said. It's a very bleak situation for Ukraine's military, he added.

In the past weeks, NATO's Breedlove had warned again and again of potential risks emerging from some 2,000 soldiers Russia had sent to its border with Ukraine as these maneuvers could easily turn into an invasion.

NATO published new satellite images which it said showed well-equipped Russian self-propelled artillery units on the border and in Ukraine. Dutch Brigadier-General Nico Tak, head of NATO's crisis management center, said these Russian troops with sophisticated equipment are highly mobile and are apparently in it for the long haul.

"We have also detected large quantities of advanced weapons, including air defense systems, artillery, tanks and armored personnel carriers being transferred to separatist forces in eastern Ukraine," he said. 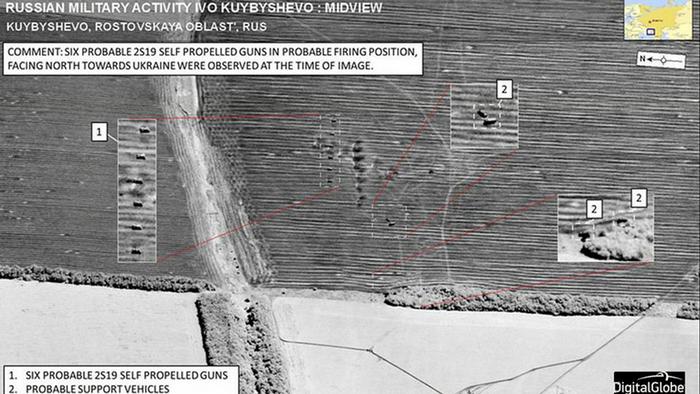 According to NATO, Russia's ultimate goal was to stave off defeat for the separatists and turn eastern Ukraine into a "frozen conflict" where Russian troops continue to occupy foreign territory but where there is no fresh fighting. The situation in eastern Ukraine would then resemble Transnistria - a Russian breakaway region in Moldova - or South Ossetia or Abkhazia in Georgia.

NATO hasn't responded to Ukraine's calls to supply its army with weapons and equipment, but the alliance has been taking part in training and restructuring Ukraine's military forces. A high-ranking NATO diplomat in Brussels said there was "no role for NATO" in the current conflict, let alone in combat operations. Ukraine is not a NATO member, but the alliance has established partnership programs with Kyiv.

In need of a strategy

Heads of state and government are due to discuss a new strategy on how to deal with Russia at next week's NATO summit in Newport, UK.

"Russia is no longer a partner like it used to be; it has to be seen as an enemy," the diplomat said.

NATO commander Breedlove had also repeatedly warned that Russia was a real threat to Baltic NATO member states. That's why the alliance wants to strengthen its military presence in the Baltic states.

EU foreign policy chief Catherine Ashton's spokesperson issued a brief statement, calling on Russia "to put an end to any form of border hostility." This included the flow of arms and military personnel into Ukraine, she added.

Pro-Russian separatists have confirmed the presence of Russian fighters. "There are Russian volunteers in eastern parts of Ukraine. No one is hiding that," Russian Ambassador Vitaly Churkin said. Alexander Zakharchenko, prime minister of the self-proclaimed Donetsk People's Republic, told news agency Reuters there were about 3,000 Russian volunteers serving in the rebel ranks. But these "volunteers" were by no means regular soldiers. 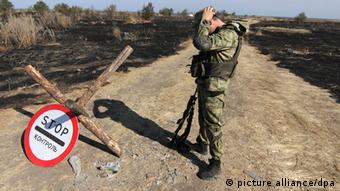 The situation is very bleak for Ukraine's military

British Prime Minister David Cameron, who is going to host the NATO summit next week, called on Russia to leave the region. "We urge Russia to pursue a different path and to find a political solution to this crisis. If Russia does not, then there should be no doubt that there will be further consequences," he said in a statement.

Polish Foreign Minister Radoslaw Sikorski called Russia's actions in eastern Ukraine an "aggression" that has created the most serious security crisis in Europe in decades. EU member state Lithuania has called on the UN Security Council to discuss the advancement of Russian troops.

Elmar Brok, chairman of the Foreign Affairs Committee in the European Parliament, said the EU heads of state and government were due to discuss stepping up economic sanctions against Moscow on Saturday. "Sanctions work. Russia has been put under great economic pressure. The Kremlin needs to realize that its politics are too expensive," he told journalists.

Obama and Merkel say Russia is meddling in Ukraine

Barack Obama blames Russia for the conflict in Ukraine. German Chancellor Angela Merkel has warned that politicians and businesses in Russia could face tougher sanctions as a result of the escalation of the conflict. (28.08.2014)

How best to end the Ukraine conflict? A mix of diplomacy and sanctions, says the deputy head of the Christian Democrats' parliamentary group, Andreas Schockenhoff - but no military operations. (28.08.2014)