Berlin police said dozens of officers were injured — and three were hospitalized — while dispersing some 20,000 people protesting anti-pandemic measures. Many participants dismissed the coronavirus as a "false alarm."

Some 45 police officers were reportedly injured in Berlin on Saturday as they tried to break up a large gathering of people demonstrating against coronavirus restrictions, including the face mask requirement.

Three of the officers were being treated in hospital, Berlin police said in a statement.

More than 130 people were arrested, for offenses including resisting arrest, breach of the peace and the use of unconstitutional symbols.

Saturday's protests, through the streets of the German capital, went ahead despite a new spike in domestic cases, and warnings that Europe is being hit by a second wave.

The police said they deployed 1,100 officers to monitor the rally and later disperse the crowd of up to 20,000 people, which was widely criticized for not wearing masks or observing social distancing.

Berlin Mayor Michael Müller sharply criticized the protesters saying they had not considered the facts and thus risked the health of other people.

He added that there was no vaccine or effective treatment yet and that the pandemic was not over. 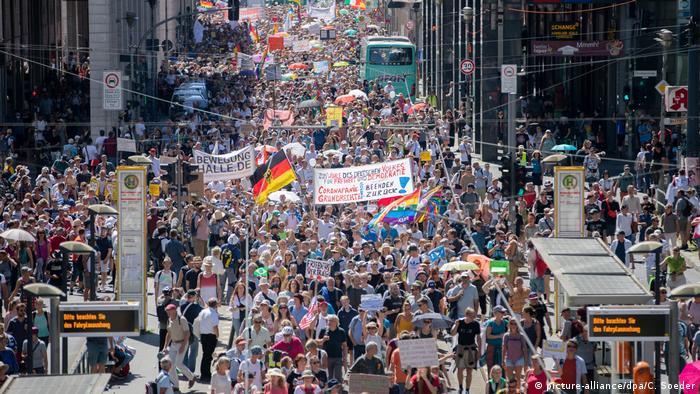 The "day of freedom" demonstration featured a mixture of hard left and right supporters, and conspiracy theorists, many of whom shouted: "We are the second wave" as they converged on the Brandenburg Gate.

Within a few hours, though, plans to continue the rally along a wide boulevard that runs through the city's Tiergarten park were shelved after a police complaint.

Berlin police said they had launched legal action against the organizer over "non-respect of hygiene rules" and as the initial rally had only registered for 1,000 participants.

Police later used loudspeakers to order demonstrators to leave the area peacefully and removed several organizers from the stage to shouts and boos from those attending.

Several officers were injured while dispersing the crowd, including three who were treated in hospital after being hit in the face by shards of glass.

Hundreds of protesters remained at the Brandenburg Gate late into the evening.

Lawmaker Saskia Esken, one of the two leaders of the center-left SPD party, slammed the attendees as "covidiots."

"Thousands of covidiots celebrate themselves in Berlin as the 'second wave' with no distancing, no masks," she said. "They are not only jeopardizing our health, they are jeopardizing our achievements against the pandemic and the revival of the economy, education, and society."

DW's correspondent Leonie von Hammerstein noted that a counterprotest took place, with many citizens angry at those wanting to break the rules.

"The difference is the counterprotesters are wearing face masks, are keeping the [correct] social distance. Whereas the other protesters are not, they have been shouting 'the pandemic never happened.'

She then described experiencing verbal abuse from some protesters, including one man who shouted in her face.

"He believed in conspiracy theories. He believed Bill Gates was behind the coronavirus and wants to forcefully vaccinate everybody and the German government is helping him to do that," von Hammerstein said.

Getting tough on rule-breakers

"Anyone who deliberately endangers others must expect that this will have serious consequences for him," Altmaier said.

CSU leader Markus Söder has opposed further relaxation of restrictions as the number of new infections continues to rise. "We must expect coronavirus to come back on us with full force", Bavaria's state premier told the Bild am Sonntag newspaper.

"Many people have unfortunately become more reckless in dealing with the virus," he said.

The number of infections in Germany has been on the rise recently, with 955 new cases recorded on Saturday and 870 on Friday.

The surge has been attributed to more socializing, summer travel and the public becoming negligent on social distancing rules, according to the Robert Koch Institute, the German government's disease control and prevention agency.