Protesters take to streets of France, Germany over police brutality

Thousands of people have rallied near Paris to mark four years since the death in custody of Adama Traore. His case, bolstered by the Black Lives Matter movement, has put renewed focus on alleged police racism in France. 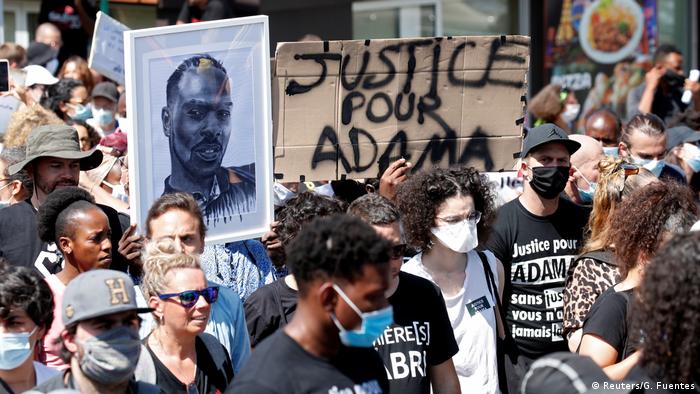 Several thousand protesters marched through the town of Val-d'Oise, outside Paris, on Saturday to commemorate the fourth anniversary of the death of Adama Traore, a Black man who died in police custody.

The 24-year-old fainted after being pinned to the ground by officers during his arrest in July 2016 and later died at a police station.

Chanting "No justice, no peace!" the crowd marched behind a banner showing Traore's face together with that of George Floyd, a Black man who died after being choked by a white police officer in the US city of Minneapolis in May sparking Black Lives Matter demonstrations around the world.

Traore's case has become a symbol for the campaign against discrimination and police violence in France and has gained new momentum in the wake of the Floyd-inspired anti-racism protests.

The circumstances leading up to Traore's death remain unclear. Since 2016, his family has been seeking a full account of events, and for the gendarmes involved to be charged with homicide.

"No man, no person should die like that, at that age," his sister Assa Traore, who has led the family's legal fight, said at the rally.

No one has been charged over the death, and the case is still under investigation. Court-ordered medical reports showed Traore died from heart failure, but his family has pointed to an independent autopsy that named asphyxiation as the cause of death. French judges ordered a new inquiry earlier this year, with results expected in early 2021.

Given that coronavirus restrictions are still in place in public spaces across Germany, many wore face coverings and attempted to keep 1.5 meters (5 feet) away from other protesters.

Calls for police reform sparked by the global Black Lives Matter movement have reached France. Researchers say that there is a long history of racism and violence in the police that goes back to the colonial era. (25.06.2020)

Hamburg police have dispersed Black Lives Matter protesters, citing a violation of coronavirus restrictions. Germany held the largest demonstrations over the death of George Floyd outside the US on Friday. (05.06.2020)