Outcry over the killing of George Floyd has gone international, with people taking to the streets in Berlin and London to show solidarity with US protesters. In Germany, soccer stars wore T-shirts and knelt in support. 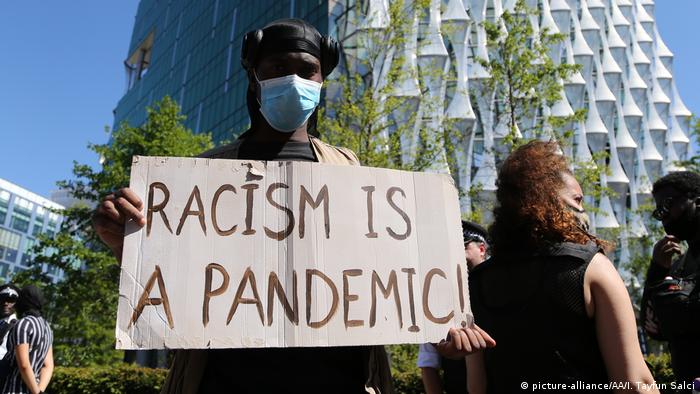 Thousands of people took to the streets of the German and British capitals on Sunday to show support for protests in the United States over the killing of a black man by a white police officer.

The death of George Floyd sparked international outrage after a video circulated of him gasping for breath while a white police officer knelt on his neck in the city of Minneapolis.

In Berlin, several hundred protesters turned out for the second day in a row, staging a rally outside the US Embassy. Demonstrators held up signs reading: "Stop killing us" and "Justice for George Floyd."

Read more: Opinion: America must wake up to the reality of racism

In Berlin's famous Mauerpark, where street artists can paint sections of the former Berlin wall, a memorial to Flynn has now appeared. Soccer stars in Germany's Bundesliga also joined in on the protests on Sunday.

Borussia Dortmund player Jadon Sancho lifted his jersey after scoring a goal to reveal a T-shirt reading: "Justice for George Floyd." He received a yellow card for the move.

Earlier, forward Marcus Thuram took a knee on the pitch after scoring during Borussia Monchengladbach's win over Union Berlin. After scoring in the first half, Thuram dropped his knee to the ground and bowed his head, waiting several seconds before getting up again.

"He made a sign against racism, one we all completely support of course. I believe that everyone fully supports it, that everyone has the same thoughts he does," Monchengladbach coach Marco Rose said.

In London, thousands of people turned out in solidarity with US demonstrators, carrying signs reading: "No justice, no peace."

The protesters knelt in Trafalgar Square before marching past the Houses of Parliament and stopping outside the US Embassy in London.

The Metropolitan police said they arrested five people outside the embassy — two for assault on police, the others for violating coronavirus lockdown guidelines.

The kneeling protests in London and during Bundesliga games are a reference to the style of peaceful protest used by Colin Kaepernick, a former San Francisco 49ers quarterback.

Kaepernick and others on NFL teams would kneel during the US national anthem to protest against police brutality and racism amid the Black Lives Matter Movement.