Both far-right and far-left groups have been blamed for violence at recent US anti-racism protests, with videos showing white people escalating tensions. Black protesters worry that they'll end up in the crossfire. 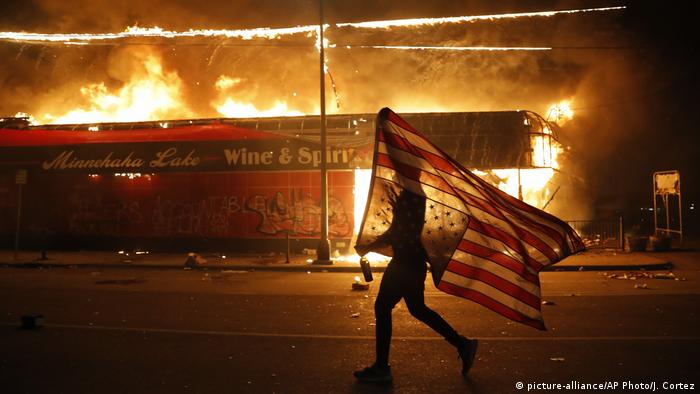 US state and federal officials say that organized rioters have been attending protests against police brutality in several major cities with the specific aim of sparking violence and destruction.

Public anger has poured onto the streets following the death of African American George Floyd in Minneapolis on Monday, who died when a white police officer pressed his knee into Floyd's neck while being arrested.

Officials have offered up little evidence to support their claims that these groups are the primary drivers of violent unrest, with the chaos at the demonstrations making it difficult to verify their identities and motives.

US President Donald Trump and his administration have solely blamed left-wing extremists and Antifa for prompting violence at the protests — but again, have not provided evidence.

On Sunday, the US leader railed against Antifa and other left-wing groups on Twitter, congratulating the National Guard for a "total shutdown" of protesters.

He also said that the US will be "designating Antifa as a terrorist organization," a threat he also made last year which sparked an international backlash.

Trump's push to blame the far-left and to blame local leaders for their handling of the protests is a move that will likely cause more national divisions in the days and weeks to come.

On Saturday, Minnesota Governor Tim Walz told reporters he'd heard unconfirmed reports that white supremacists and even drug cartels "are trying to take advantage of the chaos." The city of Minneapolis has seen five consecutive nights of protests following the death of George Floyd in police custody.

Vice News, however, reported that several members of far-right militia groups were spotted at the protests in Minneapolis, including from the "Boogaloo Bois" and the "III% militia" network — two groups that advocate for violent confrontation with law enforcement and hope to stoke civil war in the United States.

Vice also reported that a fascist group used its Telegram channel to encourage neo-Nazi followers to attack black people at the protests and spark a "race war."

Minnesota Public Radio also cited several witnesses who spotted armed white men at the protests, some who were traveling in vehicles with white supremacist insignias.

Although the motives behind those carrying out the looting and rioting remain unclear, there is stronger evidence that some of the more violent protesters in recent days traveled to dozens of US cities to take part in the protests.

In New York City, police charged a white woman from upstate New York who threw a Molotov cocktail at a police vehicle while four officers were inside.

In Detroit, 37 of the 60 protesters arrested did not live in the city. Although Detroit is almost 80% black, many of those arrested were white, police said.

Videos have circulated on social media of white people leading the charge in vandalizing buildings or in looting stores.

Local groups in Minnesota have noticed the trend as well — raising concerns about the effect that their sometimes violent involvement will have for local black communities and potentially diluting the overall message of the protests.

"I think about a third of the people are from out of town here to make the city burn,'' said Justin Terrell, executive director of the Council for Minnesotans of African Heritage, to the Associated Press.

Opinion: America must wake up to the reality of racism

UN rights chief Michelle Bachelet said the US must grapple with racial discrimination and police brutality against African Americans. Her comments were a reaction to the death of George Floyd. (29.05.2020)