Protesters mock Catalan independence bid with secession call of their own | News | DW | 04.03.2018

Protesters mock Catalan independence bid with secession call of their own

Thousands have marched in Barcelona calling for Tabarnia, a fictional province in Catalonia, to break away and remain part of Spain. The pro-unity protest was blasted for trivializing the Catalan independence movement. 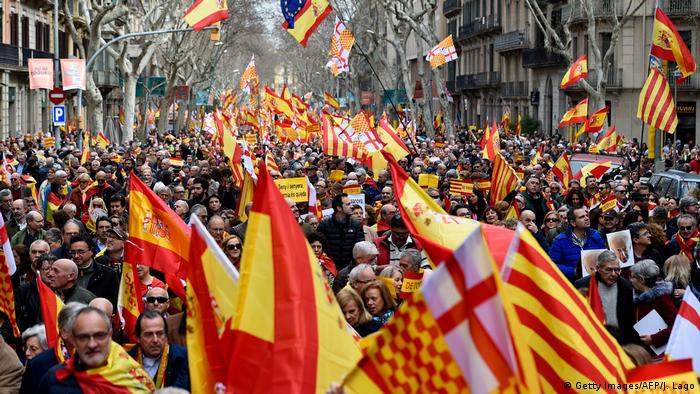 Several thousand people rallied through the streets of the Catalan capital Barcelona on Sunday, in a protest mocking the region's independence bid.

Demonstrators called for the imaginary province of Tabarnia to declare independence from Catalonia, if the troubled northeastern region secedes from Spain. The fictional name is formed from the names of Catalonia's two main provinces, Barcelona and Tarragona, where support for separation from Madrid is lower than in other parts of the region.

Sunday's rally saw self-declared Tabarnians wave banners with the slogans, "The joke is over" and "Tabarnia free of populism," while a tune they claimed was the fake province's national anthem played. The demonstrators also waved the fictional Tabarnia's proposed four-square flag, as well as many flags of Spain and some Catalan flags.

Holding up a mirror

"We want to be the mirror of what the independence movement is all about,” protest organizer Miguel Martinez told Spanish daily El Periodico.

"You can see the absurdity of their arguments. This is not the moment to put up borders, but to be united across Spain and the European Union."

The pro-unity protest drew support from Spanish aristocrat and businessman Alvaro de Marichalar, who told the national newspaper ABC: "These protests are necessary ... so that people realize there is political manipulation at all levels, that's where separatism comes from."

He blamed corruption for the strong outpouring of nationalism in Catalonia and in other autonomous regions of Spain.

The satirical Tabarnia campaign began in the lead-up to Catalonia's disputed independence referendum last October, but it only gained traction following the subsequent snap regional election in December.

A petition appeared on Change.org, calling for the non-existent Tabarnia province to force its own separation from Catalonia and remain part of Spain. The movement quickly took on a life of its own and as of Sunday had garnered more than 281,000 signatures.

Social media memes backing the petition went viral, with slogans like "Freedom for Tabarnia" and "Catalonia robs Tabarnia," imitations of the ones used by supporters of Catalan independence to promote separation from Madrid. 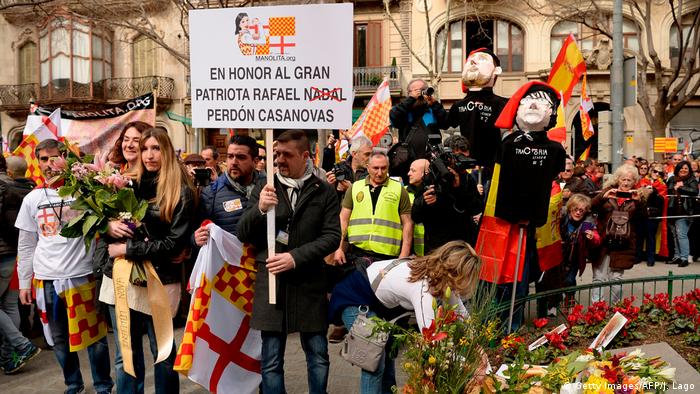 The hypothetical Tabarnia region even has its own exiled president, a further mocking reference to deposed Catalan leader Carles Puigdemont, who fled to Brussels following the failed independence vote. The role is played by actor and director Albert Boadella, an outspoken critic of Catalonia's separation from Spain.

While many Catalans get the joke, Tabarnia's barbed messages have been denounced as trivializing the true independence movement, which pro-secessionists say is based on Catalonia's distinct culture and identity and a long history of tension between Barcelona and Madrid.

Sunday's protest took place two days after Puigdemont, who has an arrest warrant in his name in Spain on charges of rebellion, sedition, and misuse of public funds, abandoned his bid to govern the region for a new term.

His proposed successor, Jordi Sanchez, the former head of the hugely influential pro-independence ANC citizens' group, has been in prison in Spain for more than four months while awaiting trial for sedition.

Pro-independence parties won a slim majority of 70 seats in the 135-seat Catalan parliament in a regional election on December 21 even though they did not get over half the ballots cast, due to a quirk in Catalonia's electoral system, which awards more seats to rural areas where support for independence is higher.