Demonstrators have protested against DW honoring Iranian political scientist Sadegh Zibakalam with its "Freedom of Speech Award," arguing that he is too close to the regime. Zibakalam rejects that allegation. 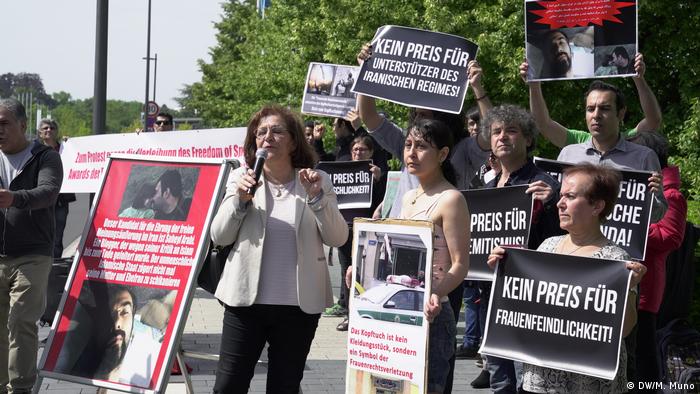 They are few in numbers, but they are loud: on Friday, 25 demonstrators directed their protest at Deutsche Welle, disagreeing with the broadcaster's decision to honor Iranian political scientist Sadegh Zibalakam with its "Freedom of Speech Award." The award is given to an individual or an initiative which promotes freedom of expression and human rights in an exceptional way. According to the protesters, most of them Iranians living in exile, Zibakalam is too close to the Iranian regime in order to be trustworthy. "For years, Zibakalam has been collaborating with the Iranian regime," Mina Ahadi (pictured above) — who fled Iran in 1981 — said in her speech at the protest.

The main criticism of Zibakalam is his wording during an interview conducted by online news outlet IranWire, where he was quoted as saying that he would "take up arms" if necessary to defend Iran against attacks from outside. As far as Ahadi is concerned, Zibakalam is therefore completely unworthy of the award: "We call on those responsible at DW to desist from handing over the 'Freedom of Speech Award' to Sadegh Zibakalam because of his support of a dictatorial regime which has been based on torture, unlawful detention, executions and terror for 39 years."

'Taken out of context'

Zibakalam, however, rejects that interpretation, saying the quotation had been taken out of context and over-simplified. What he had said during the interview "was nothing more than stating that the current situation in Iran and in the region could lead to the downfall of the political system and, thereby, to the collapse of our nation and our homeland. My argument, in this context, has been and still is that — in order to uphold Iran's independence and integrity — one might have to face even the most difficult options."

Zibakalam pointed out that "at most, 30 percent of Iranian citizens support the regime. How, then, is is possible to claim that I would take up arms against the remaining 70 percent of the population and shoot at them? A little common sense is required at this point."

DW spokesperson Christoph Jumpelt passed this statement on to the demonstrators and engaged in a discussion with them. They, however, adhered to their interpretation and referred to the original interview recording in Farsi. 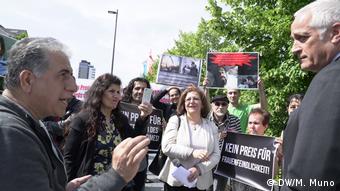 In an interview with DW in January, the 69-year-old political scientist had already pledged his commitment to a policy of reforms in his country: "In the course of that interview I stressed that there was no other option except implementing reforms and changes, even if this is undertaken in small steps." He fears a revolution would plunge the country into chaos. The protesters, however, disagree completely. "The chance of changing Iran through reforms passed by many years ago," Ahadi said.

In the wake of said interview with DW's Persian service, Zibakalam suffered personal  repercussions. The Islamic Revolutionary Court in Tehran sentenced him to 18 months in prison. In addition, he was banned from giving public speeches, publishing articles and giving interviews. In spite of that, he was glad to be chosen as recipient of the award: "I am very honored," says Zibakalam. "In Iran, having an opinion that differs from the establishment's opinion is a political crime. That's the bitter reality in my country, in which the fight for freedom of speech has a long history. Therefore, hundreds of other Iranian men and women are equally deserving of this Freedom of Speech award."

Greens politician Omid Nouripour cannot understand the criticism leveled at honoring Zibakalam; stressing he finds it "extremely good" that the political scientist is receiving the award: "It encourages people who, under great political pressure, dare to say things that are perhaps easy to say abroad but are harshly penalized in Iran," Nouripour told DW. Zibakalam's fierce critics find it easy to voice opposition from exile, he said, and they could not be punished as they lived "in free countries governed by the rule of law, and not in Iran."