Pregnant Indian activist trapped in one of Asia′s most crowded prisons | Asia | An in-depth look at news from across the continent | DW | 09.06.2020

Pregnant Indian activist trapped in one of Asia's most crowded prisons

Student activist Safoora Zargar is over four months pregnant with her first child. Arrested under a controversial law for her alleged involvement in communal rioting, she remains confined in Delhi's notorious Tihar Jail. 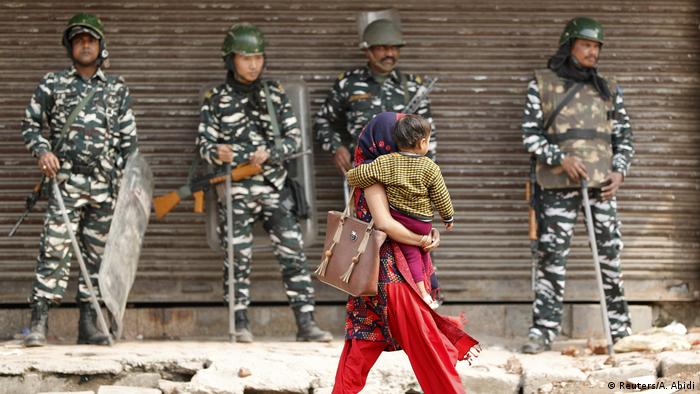 As a Muslim activist in India, 27-year-old Safoora Zargar was used to regular encounters with the police. But, even in her worst nightmares, nothing could have prepared Zargar for the situation she is in now. In her 21st week of pregnancy, Zargar is languishing in one of Asia's most crowded prisons during a global pandemic.

The activist had been at the forefront of India's protests against a controversial citizenship law passed by parliament in December last year. A student of New Delhi's Jamia Millia Islamia University, Zargar was a member of the student Jamia Coordination Committee and had participated in numerous demonstrations in Delhi from December 2019 to February.

Known as the Citizenship Amendment Act or CAA, opponents claim the controversial law entrenches Hindu nationalism and openly discriminates against Muslims, who form just over 10% of India's population.

In late February, protesters, including Zargar, clashed with pro-Citizenship Act demonstrators. The peaceful protest quickly escalated into communal violence. At least 50 people were killed, hundreds more were injured and thousands lost their homes and small businesses.

Delhi Police alleged Zargar was a "key conspirator" in the riots and consequently arrested her on April 11. The student was then charged on April 21 under the Unlawful Activities Prevention Act (UAPA) – an anti-terror law under which denies bail for an indefinite period of time. Zargar's bail pleas have already been turned down on three occasions, the latest being an order on June 4.

The UAPA – often described as draconian – was introduced to counter terrorism and safeguard the integrity and sovereignty of India. Those charged under the law can be sentenced to at least seven years in prison without bail. Those jailed under the UAPA include Masood Azhar, head of the Pakistan-based terrorist group Jaish-e-Mohammad, and Dawood Abrahim, the alleged mastermind behind the 1993 Mumbai bombings.

Most recently, Delhi police have made use of the UAPA in connection to investigations of the anti-citizenship law protests. Alongside Zargar, fellow student activists Meeran Haider, Asif Iqbal Tanha, Gulfishan Khatoon, and Natasha Narwal also face charges under the law. Activists around the country have called for their release, especially for Zargar, noting elevated health risks to the pregnant prisoner.

Rights group Amnesty International has also campaigned for Zargar's release, citing her pregnancy as a mitigating factor in her detention, particularly amid the COVID-19 pandemic. The rights group also reminded authorities that under the United Nations Rules for the Treatment of Women Prisoners and Non-Custodial Measures for Women Offenders, pregnant women awaiting pre-trial measures should be granted non-custodial alternatives where possible and appropriate.

However, Zargar's incarceration continues. Dismissing her latest bail plea, the judge was quoted as saying: "When you choose to play with embers, you cannot blame the wind for carrying the spark a bit too far and spreading fire."

According to a 2018 report by India's Ministry of Women and Child Development, there were a total of 17,834 female prisoners across the country in 2015 and 66.8% of them were awaiting trial. Seventeen percent of them were placed in female-only prisons.

The report noted that even women-only prisons suffered a severe shortage of female staff, including female medical workers, as well as a lack of available sanitary products and clothing such as undergarments. In addition, the report cited inadequate bathroom and toilet facilities and a shortage of water. The availability of nutritious food for pregnant women and lactating mothers were cited as points of concern.

Experts now warn that prison conditions have worsened due to the coronavirus crisis and they fear mass outbreaks of the disease inside facilities. All three of Delhi's prisons have reported coronavirus outbreaks and at least 20 prison workers and inmates have been infected with the virus.

Zargar's lawyers have repeatedly raised concerns about the activist's health and pregnancy-related risks in their bail pleas, but to no avail. They informed the court that she reportedly suffers from polycystic ovary syndrome and has a history of urinary tract infections.

In the latest court order concerning Zargar's bail plea, the judge – while assuring the provision of adequate aid and medical assistance – refused to consider her health status as a mitigating factor and dismissed her plea for bail.