Post-election protests continue in Iran | World| Breaking news and perspectives from around the globe | DW | 20.06.2009

Despite censorship in post-election Iran eyewitnesses describe an increasingly tense standoff between authorities and opposition protestors. 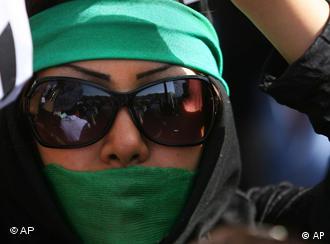 A supporter of opposition leader Mir Hossein Mousavi in Tehran

Near Enqelab Square in the center of the Iranian capital massed security forces had responded with force, using teargas and batons, to disperse several thousand protestors - fewer than the hundreds of thousands who had gathered earlier in the week.

But at nightfall rooftop protests with cries of Allahu Akbar (God is greatest) were heard for hours - reportedly from supporters of the moderate opposition leader Mirhossein Mousavi - in what observers say is an echo of tactics used in the 1979 Islamic revolution against the-then Shah. Mousavi and another ostensibly defeated candidate Mehdi Karoubi had not summoned their followers onto the streets.

Police appeared to confirm reports that a suicide bomber had detonated his device at the mausoleum of the father of Iran's Islamic Revolution, the late Ayatollah Ruhollah Khomeini. A television channel, Press TV, said the bomber was killed and three others were wounded.

Another witness, quoted by Reuters, said supporters of Mousavi had set fire to a building in southern Tehran, reportedly used by Basij, a paramiltiary force of the government of President Mahmoud Ahmadinejad.

Three busloads of Basij Islamic militia and trucks carrying motorcycles used by the paramilitaries were sighted heading for the capital. Unverified footage on the Internet showed crowds running away from police lines, several apparently wounded persons and burning vehicles. Riot police reportedly fired shots into the air. There were no confirmations of casualties. 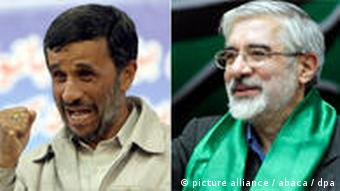 Mousavi in a newsletter posted on a website continued to defy ruling Ayatollah Ali Khamenei. Mousavi reiterated demands for annulment of the June 12 election. He cited what he called a "huge volume of cheating and changing of votes," asserting this had been "planned in advance," and said the ballots should be examined by a "reliable committee."

He added that he and his supporters were not against the Islamic system but just wanted to reform it by "peaceful means." Witnesses said he also called for a national strike if he was arrested. Since last week scores of reformists have been detained and authorities have cracked down on foreign and domestic media.

At Friday prayers, Khamenei had ruled out any electoral fraud, saying Ahmadinejad had been re-elected by a margin of 11 million votes, and warned protestors of repercussions.

On Saturday Iran's powerful 12-man Guardian Council said it was ready for a random recount of 10 percent of the ballot boxes in response to complaints by Mousavi and two other candidates.

The council had invited Mousavi, another candidate Mehdi Karoubi and a third hopeful to a special meeting. A council spokesman said only the conservative Mohsen Rezaie, who is a former Revolutionary Guard, had attended that meeting.

United States President Barack Obama called on Iran's government to "stop all violent and unjust actions against its own people."

"The Iranian government must understand that the world is watching," Obama said. The United States stood with all those who sought to exercise "universal rights to assembly and free speech," he added.

Despite assurances by Obama administration officials that Washington did not favour interference in Iran, on Friday both houses of the US Congress voted to condemn violence by Iran's government against demonstrators.

German Chancellor Angela Merkel says she is very concerned and condemns the wave of arrests following the Iranian election. EU foreign ministers have issued a joint statement calling on Tehran to examine the polls. (15.06.2009)