Berlin calls on Iran to clarify election results | World| Breaking news and perspectives from around the globe | DW | 15.06.2009

German Chancellor Angela Merkel says she is very concerned and condemns the wave of arrests following the Iranian election. EU foreign ministers have issued a joint statement calling on Tehran to examine the polls. 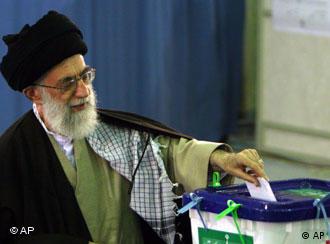 "The German government is very concerned about the current situation," Merkel said Monday in Berlin.

She strongly criticized the "wave of arrests" during the demonstrations and the fact that foreign media were being hampered from reporting on the developments.

Allegations of election fraud called for a "transparent investigation," she said.

EU foreign ministers meeting in Luxembourg issued a joint statement expressing concern about the use of violence against peaceful demonstrators in Tehran.

"This is a situation that the Iranian authorities must investigate," their statement said.

Amid the widespread international criticism and after days of unrest on the streets of Tehran, Iran's supreme leader Ayatolla Ali Khamenei has ordered the powerful Guardian Council to examine allegations of irregularities during Friday's vote.

Incumbent Mahmoud Ahmadinejad was declared winner with an overwhelming majority of more than 60 percent.

Opposition leader Mir Hossein Mousavi claims that Friday's polls were manipulated by widespread vote-rigging. He had called on Iran's top supervisory body, the Guardian Council, to nullify the election because of what he alleges were irregularities.

The interior ministry and Ahmadinejad have dismissed the criticism.

Earlier on Monday, the country's interior ministry banned an opposition rally planned for later that day.

"Some seditious elements had planned to hold a rally and by fabrication said they had permission from the interior ministry. Any disrupter of public security would be dealt with according to the law," a state radio announcement said.

In a statement, Mousavi condemned the ban, calling it an illegal act by the ministry. However, he called on his supporters not to stage any rally without permission in order to avoid "violence by violence-mongers," according to dpa news service.

Hundreds of thousands of pro-Mousavi demonstrators took to the streets of Tehran nonetheless.

Iranian state television said on Tuesday seven people had been killed near the site of a rally in Tehran.

The reports mark an escalation of violence after thousands of demonstrators clashed with police in Tehran on Saturday and Sunday. At least 60 protesters were arrested.

German Foreign Minister Frank-Walter Steinmeier has criticized Tehran over the election. He also condemned what he called "brutal actions" against demonstrators.

EU and Germany air concerns about Iran's re-election of Ahmadinejad

The European Union and Germany have expressed concerns about alleged irregularities in Iran's presidential election, as supporters and opponents of President Mahmoud Ahmadinejad rally on the streets of Tehran. (15.06.2009)