Pope warns against sin of hostility to migrants

Pope Francis has called hostility aimed at migrants and refugees a sin, urging communities not to yield to fear of the other. The pontiff delivered his message at a special Mass for asylum seekers, refugees and migrants. 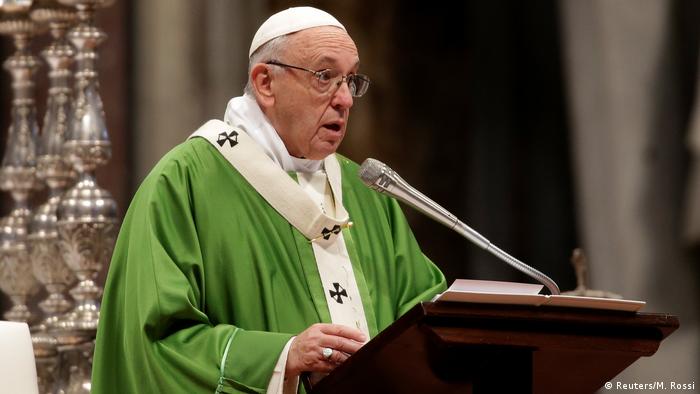 Pope Francis told those gathered at St. Peter's Basilica on Sunday that while fear was an understandable human response, it should not lead to anger and rejection.

"Local communities are sometimes afraid that the newly arrived will disturb the established order, will 'steal' something they have long labored to build up," he said, while the newly arrived "are afraid of confrontation, judgment, discrimination, failure.

"Having doubts and fears is not a sin," the pope continued. "The sin is to allow these fears to determine our responses, to limit our choices, to compromise respect and generosity, to feed hostility and rejection."

Francis invited thousands of immigrants, asylum seekers and refugees from some 50 countries to attend the special Mass at the Vatican to mark the World Day of Migrants and Refugees.

The Argentina-born pontiff has frequently spoken out for the rights of migrants during the five years he has led the Catholic Church. Since his election in 2013, the world has witnessed a number of migrant crises, including a surge in the number of refugees from the Middle East and Africa seeking to reach Europe, and an exodus of Myanmar's persecuted Rohingya minority to Bangladesh.

On his first official trip outside Rome, Francis traveled to the Italian island of Lampedusa — at the time a primary European entry point for thousands of mainly African migrants. In April 2016, he visited the Greek island of Lesbos, which has also been overwhelmed by migrants arriving by boat from Turkey.

"It is not easy to enter into another culture, to put oneself in the shoes of people so different from us, to understand their thoughts and their experiences," Francis said. "As a result, we often refuse to encounter the other and raise barriers to defend ourselves."

The 81-year-old also stressed that newcomers must "know and respect the laws, the culture and the traditions of the countries that take them in." Communities, on the other hand, have "to open themselves without prejudices to (newcomers') rich diversity, to understand the hopes and potential of the newly arrived as well as their fears and vulnerabilities."

On Monday, Francis will begin an eight-day tour of his native South America, visiting Peru and Chile.