Pope Francis, alongside Orthodox leaders, is visiting the Greek island of Lesbos to show the plight of refugees. The visit comes as a controversial EU-Turkey deal aimed at ending the migration crisis takes effect. 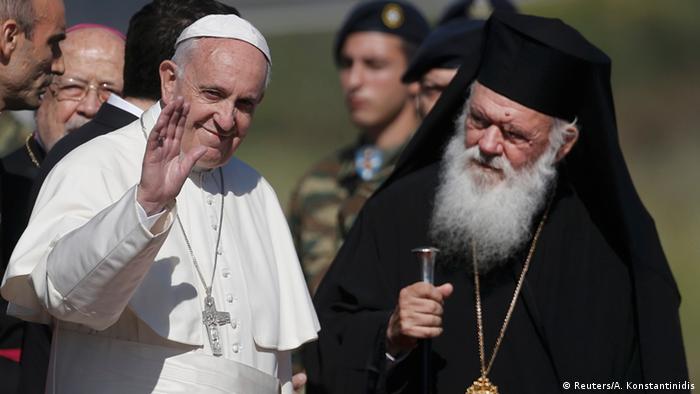 They greeted about 250 refugees who are currently on the Greek island. Afterwards they are expected to have lunch with some of them, and throw floral wreaths in to the sea while praying for those who died on the journey to the island. DW correspondent Bernd Riegert, reporting from Lesbos, said the Pope told the refugees at Moira camp "you are not alone."

Later in their visit, the three religious leaders signed a joint declaration calling for the protection of human lives to be made a priority and for the international community to extend temporary asylum to those in need.

Dozens of refugees who didn't meet the pope gathered holding makeshift banners with slogans such as "Pope you are our hope," ''please save Yazidi people," ''we are also human," and "Welcome Pope Francis."

The pope has reportedly offered to take 10 refugees back to Italy with him when he departs the Greek island, Greek state television ERT reported, adding it appears eight Syrians and two Afghans will be offered passage. The inclusion of the latter would be a symbolic move at a time when the EU has stopped automatically considering Afghans as refugees and does not include them among the nationalities whose asylum applications are approved.

The visit by Pope Francis coincides with the implementation of a controversial deal between the European Union and Turkey aimed at stopping people attempting to reach Europe. Under the deal, people who arrive in Greece in smugglers' boats would be detained and deported back to Turkey unless their applications for asylum in Greece were successful.

The Pope was to visit a Greek "hotspot" - a migrant processing center where conditions have been criticized by rights groups. Before setting off for Greece, he made this statement on Twitter.

"Refugees are not numbers, they are people who have faces, names, stories and need to be treated as such."

Hundreds of thousands of people seeking refuge have arrived on Lesbos during the past year, having made the short but risky journey from the Turkish coast in smugglers' boats. Most of the arrivals then continued traveling through the Balkans to wealthier western European countries - often Germany and Sweden – to file asylum claims there. Germany recorded some 1.1 million new arrivals in 2015. That practice has all but stopped as nations along the so-called Balkan route shut their borders to transiting migrants in March, leaving thousands of people stranded.

Greek Prime Minister Alexis Tsipras said Saturday that the pope's visit to the Greek island was "a historic event and an important opportunity to highlight the need to find a legal route into Europe for those fleeing conflict."

"I am proud of this, particularly at a time when some of our partners - even in the name of Christian Europe - were erecting walls and fences to prevent defenseless people from seeking a better life. That is why I consider that your visit is historic and important," Tsipras told Francis shortly after his arrival at the airport Saturday.

Meanwhile, local municipal crews were reportedly scrubbing walls in the capital and main port of Lesbos after graffiti was sprayed overnight in places where the pope will speak. The words "Papa Don't Preach" were sprayed in black at several points on the seafront in Mytilene.

The European border patrol agency Frontex intercepted a dinghy carrying 41 Syrians and Iraqis off the coast of Lesbos three hours before the pope's visit.

Apostolos Nikolaidis: "Refugees have the support of the Christian Church"

A visit to Lesbos by Pope Francis and the head of the Greek Orthodox Church is a further sign of the readiness of the churches to work together, says theologian Apostolos Nikolaidis. (14.04.2016)