Pope Francis has used his annual World Day of Peace address in the Vatican to "give voice" to the world's migrants and refugees most in need. Defending migrant rights has become a key theme of his papacy. 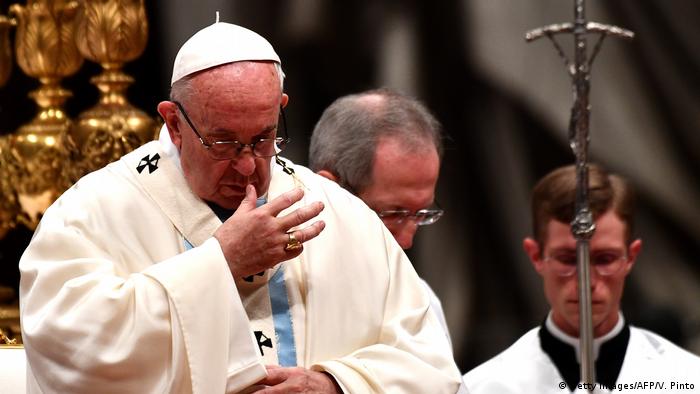 Pope Francis urged world leaders to do more to help the world's "weakest and most needy" refugees during his traditional New Year's address in St. Peter's Basilica on Monday.

With some 40,000 visitors gathered on St. Peter's Square at the Vatican to listen to the address, Francis said that he had chosen the plight of refugees as the central theme for this year's World Day of Peace, a Roman Catholic day of celebration held every year on January 1.

Read more: Pope Francis bemoans 2017 as a year of war, lies and injustice

"For this peace, to which everyone has a right, many of them are willing to risk their lives in a journey which is often long and dangerous; they are willing to face strain and suffering," the pope said. "Please, let us not extinguish the hope in their hearts; let us not suffocate their hopes for peace!"

Francis has made the hardships facing migrants the world over a key focus of his papacy. The pope has often met with some of the hundreds of thousands of African refugees who have crossed the Mediterranean illegally into Europe. Last month, Francis also traveled to Bangladesh to meet with the suffering Muslim Rohingya refugees who have been forced to flee their flee their homes in Myanmar.

The pontiff also used his speech to criticize US President Donald Trump's stated intention to build a wall along the US-Mexico border to keep out illegal immigrants.

Francis also used his World Day of Peace speech to call on Christians to jettison what he called "empty chatter" and banal consumerism and focus instead on building a welcoming environment for the world's refugees.

Read more: Pope Francis speaks out against nationalism in Europe

"At the beginning of the year, we too, as Christians on our pilgrim way, feel the need to set out anew from the center, to leave behind the burdens of the past and to start over from the things that really matter," he said.

The pontiff also suggested setting aside a moment of silence each day for prayer. Doing so, Francis said, would "keep our freedom from being corroded by the banality of consumerism, the blare of commercials, the stream of empty words and the overpowering waves of empty chatter and loud shouting."