Pope Francis bemoans 2017 as a year of war, lies and injustice

Amid tension over North Korea, Pope Francis has warned of the threat of nuclear war during his last service of the year. He complained that 2017 had been squandered and abused. 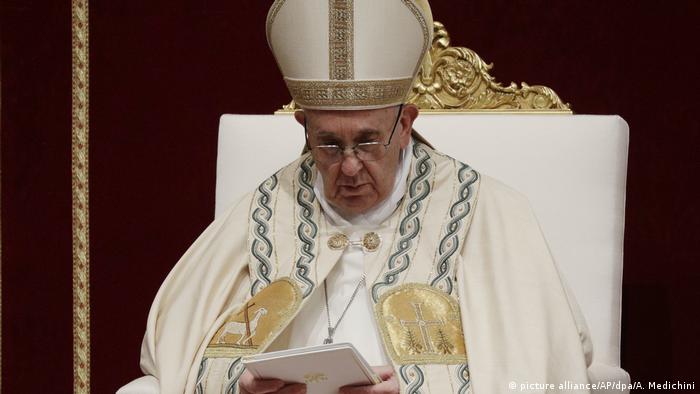 Pope Francis told the Catholic faithful that man-made ills, including wars, injustices and social and environmental degradation, had spoilt 2017.

Speaking during the New Year's Eve prayer service in St Peter's Basilica on Sunday, he said the year had been given "whole and sound" by God but "we humans in so many ways ruined it and hurt it with works of death, with lies and injustices."

While war was the most obvious sign of "unrepentant and absurd pride," many other transgressions had caused "human, social and environmental degradation," he said.

The pope's service included remarks about the brutality of nuclear warfare, and he distributed a photograph of a young victim of Nagasaki — the Japanese city on which the US dropped an atomic bomb shortly before the end of World War II. The image shows the boy carrying his dead brother on his back to be buried.

Francis’ comments follow a year of increased tensions between the US and North Korea over Pyongyang's testing of nuclear missiles. He is expected to address the issue again during his New Year's Day Mass on Monday, which is dedicated to the theme of world peace.

Despite the gloom, the pope said "gratitude prevails" thanks to those who "cooperate silently for the common good." He singled out parents and educators who try to raise young people with a sense of responsible ethics.

He spoke of his gratitude to the residents of the city of Rome, who he said had performed many good deeds over the past year.

"Even when these people don't generate any news, they make up the majority of the people who live in Rome," Francis said.

Pope Francis has equated the story of Joseph and Mary to the current refugee crisis during his Christmas Eve Mass. He said the respect for migrants was an integral part of Christianity. (25.12.2017)

Pope Francis is going to need a microscope to see this year's Christmas gift from Lithuania. The small Baltic country has given Francis a microscopic nativity scene where baby Jesus is smaller than a human cell. (22.12.2017)