Pope Francis is going to need a microscope to see this year's Christmas gift from Lithuania. The small Baltic country has given Francis a microscopic nativity scene where baby Jesus is smaller than a human cell. 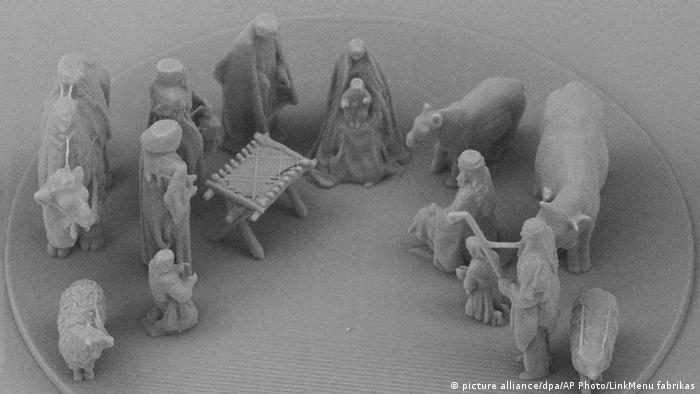 Pope Francis will have to look extra hard to see what's special about his Christmas present from Lithuania.

Lithuania's government and researchers in the capital Vilnius announced on Friday that they sent Francis a nativity scene that is invisible to the naked eye.

The scene is a replica of the life-sized creche located in Cathedral Square in downtown Vilnius.

Lithuanian President Dalia Grybauskaite posted a picture on Twitter of herself using a microscope to view a copy of the one that was sent to Francis earlier this month.

"The most important things — invisible to the naked eye," Grybauskaite wrote on Twitter, calling the model the "world's smallest nativity scene."

That distinction is still pending, however, as the university where the model was produced said it was only recently submitted for review by judges with the Guinness World Records.

Students and professors at the "LinkMenu Fabrikas" center at Vilnius Gediminas Technical University (VGTU) developed the project along with local companies. It took the team three months to complete the replica, the university said in a statement.

The team first scanned the life-sized sculptures in the Cathedral Square nativity before making a digital model of the scene. They then reproduced the scene, but smaller by a factor of 10,000, and used a 3D printer to create it.

The resultant depiction of popular lore measures 300 micrometers (0.3 millimeters; 0.012 inches) across and could be placed on a single human eyelash. Images of the nativity scene show it placed within the eye of a needle. 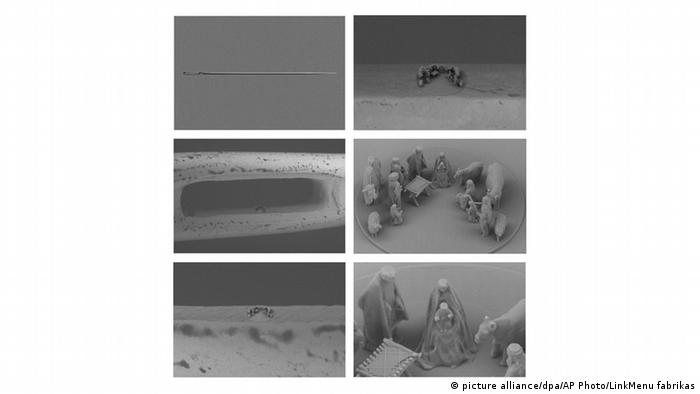 The university released images of the nativity scene, showing it nestled in the eye of a needle

"In this nanoscale, Baby Jesus is smaller than a human cell!" according to the university statement.

A total of five copies of the scene were made, with one going to Francis, one to Lithuania's Presidential Palace and another to the Vilnius Archdiocese. Two of the replicas will be made available to the public.

The gift was sent ahead of Francis' planned visit to the Baltics next year. He is expected to tour Lithuania, Latvia and Estonia in the second half of 2018, but exact dates have not yet been released.

Besides an attempt to impress the Argentine pope before his visit, the Lithuanian government and VGTU are using the mini-model to promote the country as a hub for cutting-edge technology.

A video posted by VGTU about the production of the model includes the greeting: "Welcome to high-tech Lithuania, Pope Francis."