The teenage climate activist and the leader of the world's Catholics agree that the world needs to fight climate change. Pope Francis gave his blessing for Thunberg's fight for the climate. 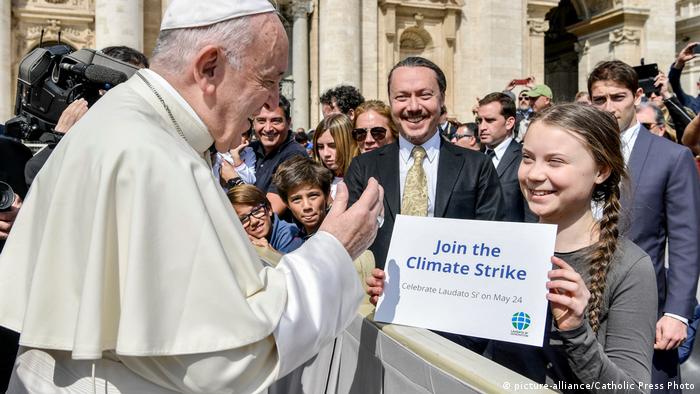 The teenage environmentalist sat in the front row of the pope's general audience in St Peter's Square when the two spoke.

"Thank you for standing up for the climate and speaking the truth. It means a lot," she told him.

"God bless you, continue to work, continue. Go along, go ahead," he responded.

Speaking after the meeting, Thunberg told Swedish newspaper Dagens Nyheter: "He was very friendly. He smiled the whole time."

The leader of the world's Catholics and Thunberg more or less see eye to eye on climate change. Francis has urged the world to protect the environment, even writing a 2015 document on fighting climate change.

Since then he has advocated for the reduction of fossil fuels and calling for the world to convert to clean energy.

Thunberg has inspired a generation of children to strike against climate change and hold regular protests against global inaction on the matter. Thunberg has chastised global leaders for not treating the threat of climate change as a life-threatening emergency.

On Tuesday she called on the EU to reduce CO2 emissions by at least 50% in 10 years.

Read more:Extinction Rebellion: The activists risking prison to save the planet