Pope Francis has visited Myanmar's military chief, whose forces have denied blame for the Rohingya refugee crisis. The Vatican withheld meeting details, only saying both acknowledged a "great responsibility." 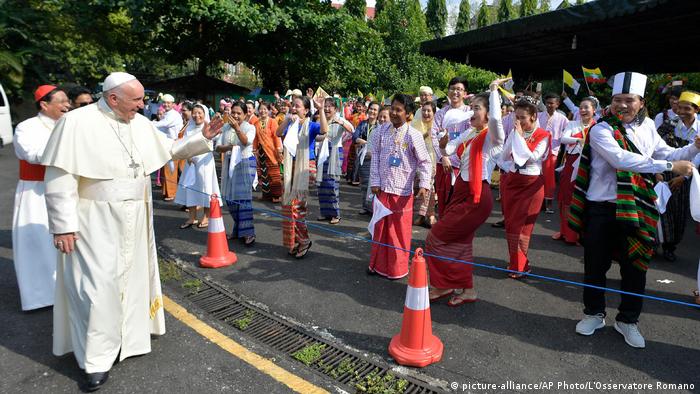 Francis began his six-day South Asia tour on Monday, closely watched on how he would address the recent mass-flight of 620,000 Rohingya Muslims from Buddhist-majority Myanmar's Rakhine state into Muslim-majority Bangladesh.

His trip, which continues in Myanmar until Thursday — to be followed by two nights in Bangladesh — was planned before the United Nations and the US said that Myanmar's treatment of the Rohingya bore the hallmarks of "ethnic cleansing."

Catholics, who account for only 660,000 (1.2 percent) of Myanmar's population of 53 million, had publicly urged Francis to avoid the term "Rohyingya," because it was shunned by many locals.

Vatican spokesman Greg Burke did not say whether the pontiff had used the term, but said Francis and General Min Aung Hlaing had jointly spoken "of the great responsibility of the authorities of the country in this moment of transition."

Hlaing, meanwhile, wrote in a post on Facebook that he had told Francis that "Myanmar has no religious discrimination at all."

They met at St. Mary's Cathedral in Yangon, the nation's largest city and former capital. 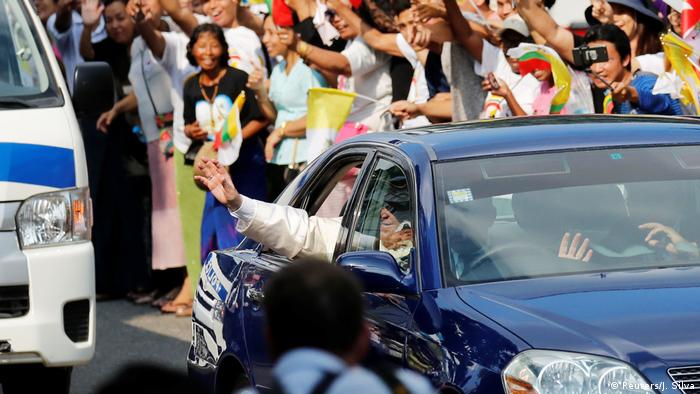 No frills arrival in Yangon, in a simple blue sedan

A deal on repatriation of Rohingya refugees sheltering in southern Bangladesh was signed by Myanmar and Bangladeshi officials days before the pope's arrival, but according to the UN it is still unsafe for them to go home.

Myanmar's military has denied persecuting Rohingya and instead said it responded in August, when Rohingya militants attacked security posts.

Arriving in Yangon on Monday, the pope was greeted by around 30,000 followers who lined the route from its airport to the archbishop's residence. Francis rode in a simple blue sedan.

On Tuesday, Francis meets Myanmar's civilian leader, Aung San Suu Kyi, whose Nobel peace prize has been tarnished by her reticence on the Rohingya crisis.

He is also due to deliver a speech to officials and travel to Myanmar's capital Naypyidaw.

The English university city of Oxford has stripped Myanmar's de facto leader, Aung San Suu Kyi, of its highest honor, citing her inaction in the face of the Rohingya crisis. Suu Kyi studied at Oxford in the 1960s. (28.11.2017)

Opinion: The pope is visiting a minefield in Myanmar

Crisis management, Catholic style: During his visit in Myanmar and Bangladesh, Pope Francis will make a stand against the political abuse of religion. An extremely delicate mission, says DW's Astrid Prange. (26.11.2017)

Rights advocate Amnesty International accuses the Myanmar government of imposing an apartheid regime. Since violence broke out in August, over 600,000 Rohingya have so far fled the country's western Rakhine state. (21.11.2017)