In some of his harshest comments to date on abortion, Pope Francis compared the procedure to a mafia-style killing. Conservative Catholics have accused Francis of not speaking out enough on hot button cultural issues. 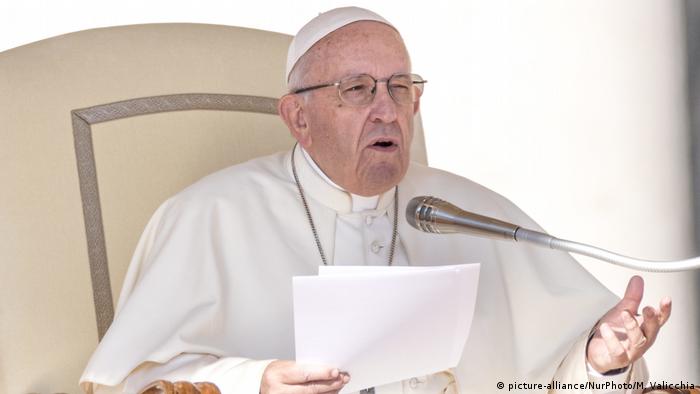 Pope Francis railed against abortion and euthanasia on Wednesday, saying both are part of what he dubbed today's "throwaway culture."

Addressing worshippers in the Vatican, Francis noted that some people defend abortion and reproductive choice as "safeguarding other rights."

"How can an act that suppresses innocent and defenseless life as it blossoms be therapeutic, civil or simply human?" he asked the assembled faithful.

In unprepared remarks, Francis then asked the crowd if it was fair "to take out a human life" or "hire a hit man" in order to solve a problem.

Wednesday's comments were some of the harshest that Pope Francis has yet made against abortion.

In June, Francis criticized the decision by some couples to have an abortion after pre-natal tests revealed birth defects or genetic disorders. At the time, Francis said the use of such pre-natal screenings was the "white glove" equivalent to Nazi-era eugenics programs.

Hailed by some as the Catholic church's "liberal pope," Francis has been criticized by conservative Catholics for not speaking harshly enough on hotly debated cultural topics such as contraception, abortion and same-sex marriage.

Although the church strictly opposes abortion, Francis has acknowledged in the past that women are sometimes driven to have abortions. In 2016, he authorized ordinary priests, not just bishops, to forgive women should they ask for it.

Francis opposed a bill in his home country of Argentina that would have legalized abortion. Although the bill passed in the lower house, senators in Argentina rejected the bill in August.