Father Fernando Karadima, who was at the center of a child sexual abuse scandal during the 1980s and 1990s, has been stripped of his duties by the pope. Karadima had been found guilty in 2011 of abusing teenage boys. 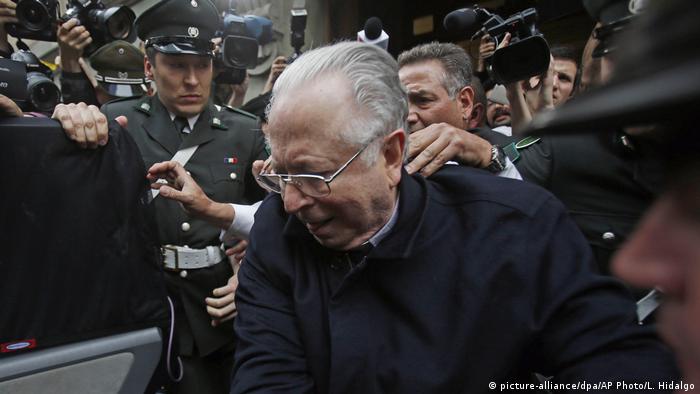 Pope Francis has defrocked Father Fernando Karadima, the notorious 88-year-old priest at the center of a child sex abuse scandal, the Vatican said on Friday.

Karadima was found guilty by the Holy See in 2011 of assaulting a number of minors in the 1980s and '90s, and ordered to live a life of "penance and prayer." At the time of the abuse, Karadima was an influential priest in an upscale Santiago parish, and had connections to Chile's wealthy elite, including to the government of Augusto Pinochet.

Juan Carlos Cruz, a survivor of Karadima's abuse, thanked Francis in a tweet. " I hope thousands of survivors feel a bit of the relief I feel today."

"Penance and prayer" — the Vatican's usual penalty for elderly priests convicted of raping and molesting children — has long been criticized by victims as too lenient.

The pope used his "supreme" authority to upgrade the original 2011 sentence, according to a Vatican statement. The decree, which takes immediate effect, was signed on Thursday and Karadima was informed of it on Friday. It is the stiffest punishment available to the pope, with the exception of excommunication.

In May, Pope Francis apologized to Chilean victims of sexual abuse and promised to never repeat the mistakes of the past. In a letter, he voiced his deep "shame" for the Catholic Church's failure "to listen and react in time" to reports that members of the clergy in Chile were abusing children. He vowed that nothing of the sort would happen ever again.