Pope Francis calls for a world free of nuclear weapons 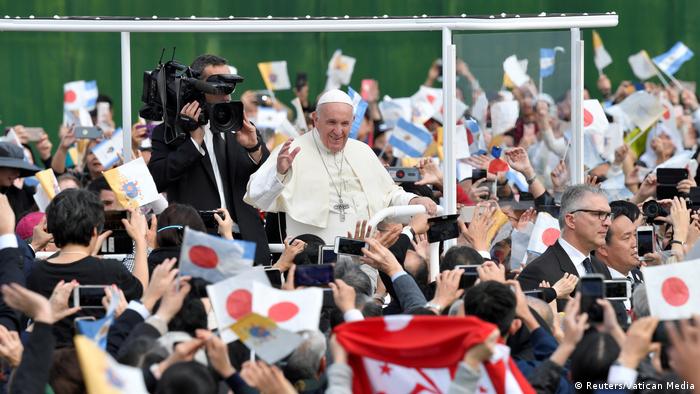 In a highly symbolic visit to Nagasaki, one of the two Japanese cities devastated by nuclear strikes during the closing days of World War II in August 1945, Pope Francis said nuclear weapons were "not the answer" for global security, peace and stability.

"Convinced as I am that a world without nuclear weapons is possible and necessary, I ask political leaders not to forget that these weapons cannot protect us from current threats to national and international security,'' Francis said in Nagasaki on Sunday.

"Peace and international stability are incompatible with attempts to build upon the fear of mutual destruction or the threat of total annihilation,'' Francis noted. "They can be achieved only on the basis of a global ethic of solidarity and cooperation.''

After laying a wreath of flowers and praying in the rain at the foot of the memorial to the atomic bomb victims, the somber pontiff said the place stands as a stark reminder "of the pain and horror that we human beings are capable of inflicting upon one another.'' 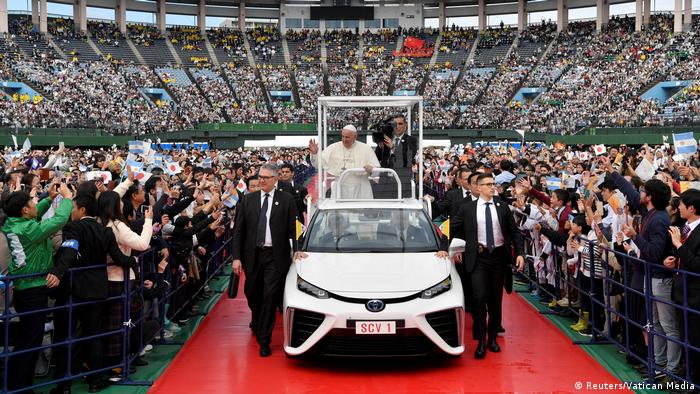 The head of the world's 1.3 billion Catholics also criticized governments for spending huge sums on the development and manufacture of destructive weapons, while millions of people worldwide remain destitute.

"In a world where millions of children and families live in inhumane conditions, the money that is squandered and the fortunes made through the manufacture, upgrading, maintenance and sale of ever more destructive weapons, are an affront crying out to heaven.''

After his Nagasaki trip, Francis also visited Hiroshima, the other city attacked with a nuclear weapon, and met survivors.

Francis kicked off his four-day visit of Japan on Saturday, arriving at Tokyo's Haneda Airport after visiting Thailand. He is the first pope to visit Japan in 38 years, following John Paul II in 1981.

The pope's Asian tour is seen as part of the Catholic Church's recent efforts to shift its focus more to Asia, Africa and South America, where the number of Catholics is now growing rapidly.

In Nagasaki, hundreds of people in white waterproofs sat in torrential rain to hear the pope's speech. "I think he is a person who can deliver the message of peace without inhibition,'' said Negoro Fumiyo, a 62-year-old Christian from Osaka.

"It's like a dream, I'm so excited. When I saw TV last night, with hymns playing and Nagasaki scenes shown, I was practically in tears," said Akemi Yamano, a 59-year-old teacher. "I was here when the last pope came as well. I think it's unbelievable that I've been able to see two popes in my lifetime. It's like a miracle." 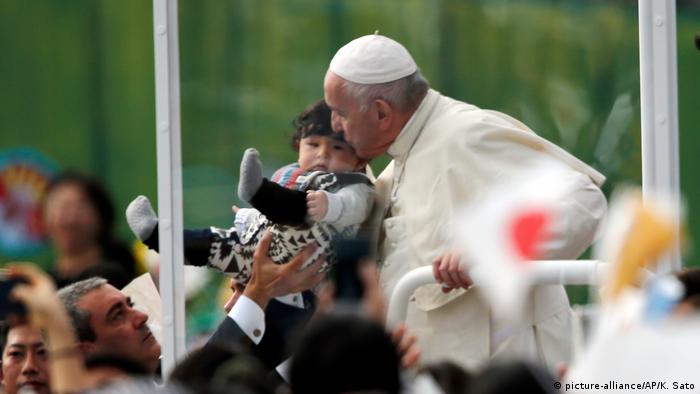 Pope Francis kisses a child from his popemobile

Catholicism is a minority religion in Japan, with Catholics accounting for around 440,000 of the 127 million Japanese people. Christians in Japan suffered centuries of repression, being tortured to recant their faith, and Francis paid tribute to the martyrs who died for their religion.

The first Christian missionaries arrived in Kyushu, Japan's most southern main island, with Francis Xavier and the Jesuits stepping ashore in the 1540s. They were initially successful in converting as many as 130,000 local people and even local "daimyo," or feudal lords.

But Emperor Ogimachi began the pushback against what was seen as a foreign influence, and Christianity was repressed from 1587 onwards. Opposition to the religion evolved into an outright ban in the early 17th century. Those who refused to reject Christianity were often executed; others — the "hidden Christians" — continued to practice their faith in secret.

Alongside its nuclear history, Nagasaki is also important to the history of Christianity in Japan because six Franciscan missionaries, three Japanese Jesuits and 17 followers of the church, including three boys, were crucified in the city on February 5, 1597, as they refused to recant their faith. Known as the "Martyrs of Japan," they were canonized by the Catholic Church in 1862.

Francis' visit to the city gave him the chance to honor the Christian missionaries and martyrs. "May we never forget their heroic sacrifice!'' Francis said in remarks at the memorial. 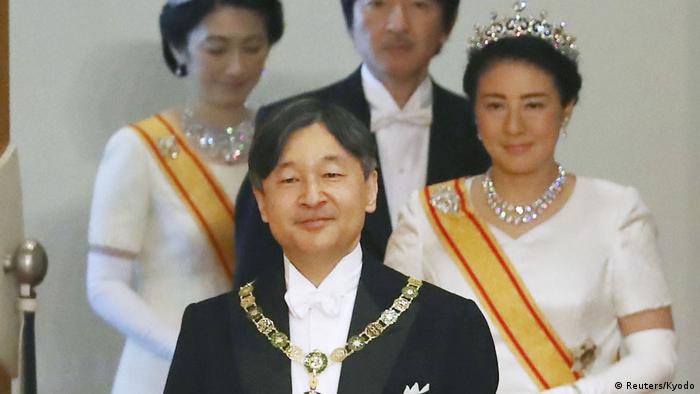 On Monday, the pope will meet Japanese Emperor Naruhito at the Imperial Palace in Tokyo

By visiting Japan, Francis is fulfilling a long-held ambition to preach in the country, which he wanted to visit as a young missionary.

On Monday, the pope will meet Japan's new Emperor Naruhito at the Imperial Palace in Tokyo, hold talks with Japanese government officials and local Catholic leaders, as well as hold a mass at the Tokyo Dome.