Pope Francis has arrived in Amman for a three-day tour of the Middle East. The trip will give him a firsthand look at the condition of Syrian refugees in Jordan and take him to the occupied West Bank. 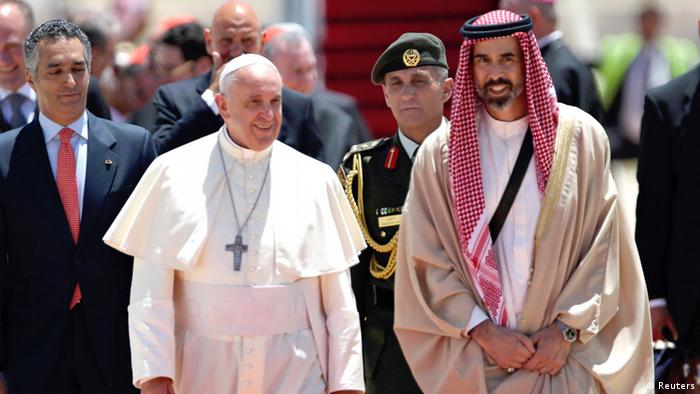 Pope Francis was greeted by thousands of people on Saturday when he arrived at Amman's Queen Alia International Apart. He was received by an honor guard, Catholic leaders and Prince Ghazi bin Mohammed (pictured), the chief advisor for religious and cultural affairs to King Abdullah II.

The Vatican has called the Pope's first visit to the Middle East a "pilgrimage of prayer" that is designed to strengthen ties with Muslims and Jews. Francis has said he will shun a bullet proof vest and ride in open-top cars, despite security concerns.

On the flight to Amman, the pontiff told journalists that the trip would be "challenging" but rewarding.

"My heart beats and is looking to love," he said.

After speaking with Prince Ghazi at the airport, the Pope climbed into a sedan and made his way to the king's palace, accompanying by a group of motorcycles. He then met with King Abdullah II and his wife Queen Rania.

During his first remarks in Jordan, Francis called for a "just solution" to the Israeli-Palestinian conflict.

"Lasting peace for the entire region --- requires that a peaceful solution be found to the crisis in Syria, as well as a just solution to the Israeli-Palestinian conflict," he said.

Later he will hold mass in Amman's International Stadium. The Vatican estimate some 25,000 people would attend the service, including many Palestinian, Syrian and Iraqi refugees.

Francis is slated to meet with Palestinian President Mahmoud Abbas before visiting refugees and disabled children at a church in Bethany, which many believe is the traditional site where Jesus was baptized.

Later in the trip the Pope will attend a joint Catholic-Orthodox prayer service in Jerusalem in the church viewed as the place of Jesus' crucifixion on Sunday. The Vatican has called it the highlight of the trip.

He will also meet Muslim and Jewish leaders in Jerusalem.

The leader of the Orthodox Church, the Ecumenical Patriarch Bartholomew I of Constantinople, is officially in Germany for a ten-day pastoral visit. However, political dimensions of his trip are evident. (11.05.2014)