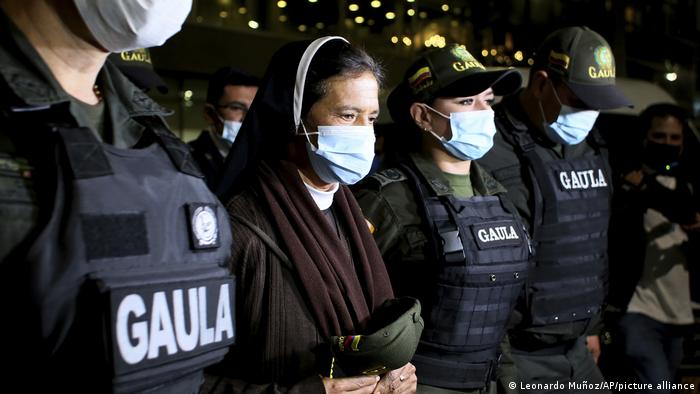 Cardinal Angelo Becciu, one of 10 co-defendants in a massive Vatican financial corruption trial, delivered bombshell testimony Thursday that Pope Francis authorized payment of up to €1 million ($1.05 million) to secure the release of a nun held captive by Islamist terrorists in Africa.

The testimony came as Becciu, on trial for embezzlement, abuse of office and witness tampering — charges he denies — was questioned about his relationship with Cecilia Marogna, a co-defendant.

Marogna, a self-styled intelligence expert accused of embezzling at least half a million euros and running up an expense account for luxury goods, had previously claimed to have intervened to help secure the release of Catholics held hostage in Africa on behalf of the Vatican.

Becciu, who hired the woman, denied the two were romantically linked but said he turned to her for help after receiving word that Sister Gloria Cecilia Narvaez, a Colombian nun, had been taken hostage by the "Group to Support Islam and Muslims" (GSIM) — a jihadist terror outfit linked to al-Qaeda — near Mali's border to Burkina Faso.

The Islamist group financed its activities by ransoming Western hostages and published videos of Sister Narvaez asking the Vatican for help. Becciu says he was contacted by the Vatican's nuncio — a type of ambassador — in Colombia, as well as nuns from the Order of the Franciscan Sisters imploring him to help free the kidnapped nun.

Sister Narvaez had been working as a missionary in the area for more than six years and reportedly volunteered in place of two younger nuns the group had originally intended to take. 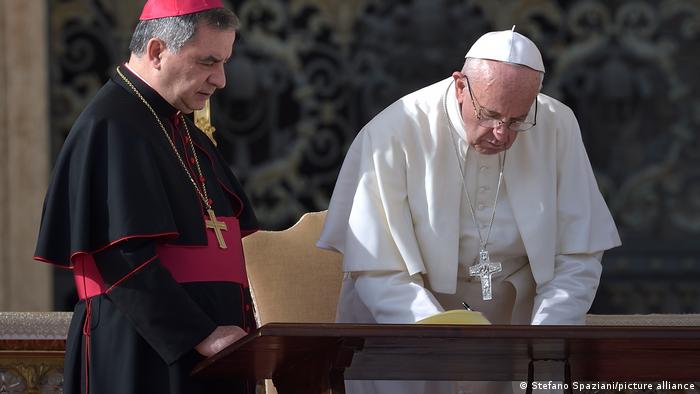 'Every step was agreed with the Holy Father'

Becciu, a top advisor to Pope Francis, testified that he approached the pontiff about the issue as well as contacted Marogna, who also had ties to Italian intelligence services.

Marogna suggested that she could use her contacts with The Inkerman Group, a private UK-based security firm, to facilitate Sister Narvaez's release from captivity.

According to Becciu, Francis told him to pursue cooperation with Marogna and Inkerman but swore him to secrecy for fear of the damage it could do to the Vatican's reputation as well as the security implications such news could have.

When Becciu and Marogna traveled to Inkerman headquarters in London in January 2018, agents there said they could not guarantee success and that freeing the nun could cost as much as €1 million.

To shield the Vatican from direct involvement, all payments went through accounts controlled by Marogna, who acted as the main intermediary.

Becciu testified that he gave the pope, who was traveling to Peru, a readout of the meeting over the phone, saying, "He listened to me and confirmed my intention to proceed."

The Cardinal said, "in a subsequent meeting with the Holy Father, once in Rome, I spoke to him in more detail about the conversation we had with the Inkermans and the sum that we should have estimated in broad terms: about €1 million, part to pay for the creation of a network of contacts, and part for the effective liberation of the nun."

Becciu told the court: "He approved. I must say that every step of this operation was agreed with the Holy Father."

Although it is not known how much if any Vatican money was actually given to the Islamists holding Sister Narvaez, she was eventually released in October 2021, after more than four years in captivity.

Shortly thereafter, she traveled to the Vatican where she met with Pope Francis.

Becciu, who was the Vatican's deputy secretary of state from 2011 to 2018, had refused to testify for nearly two years until Pope Francis recently lifted his oath of "pontifical secrecy," allowing him to speak.

During seven hours of testimony Thursday, Becciu defended his relationship with Cecilia Marogna, condemning the way it had been portrayed in the Italian media.

Becciu said reports calling Marogna "The Cardinal's Lady," had "distorted, with offensive insinuations of an infamous nature" the true nature of the situation. He called such reports, "harmful to my priestly dignity."

The heart of the trial against Becciu and his nine co-defendants revolves around a €350 million London real estate investment by the Vatican Secretariat of State. The Vatican ultimately lost €217 million when the deal tanked. The Vatican has also charged two Italian bankers with extortion in the scandal.

Cardinal Becciu was grilled about his relations with other Vatican officials Thursday, as well as about the banks used in the real estate deal.

He also defended himself against allegations leveled by Cardinal George Pell, an Australian priest who was forced to step down as the Vatican's chief financial officer to stand trial in a sex-abuse scandal in Australia. Pell was acquitted but had accused Becciu of helping finance the case against him.

All 10 defendants, accused of defrauding the Holy See of millions through bad investments, bogus commissions and fees, have pleaded not guilty.