Police in Victoria say they are not investigating money transfers from the Vatican rumored to be linked to the case of Cardinal George Pell. They said they had no evidence of suspicious activities related to the funds. 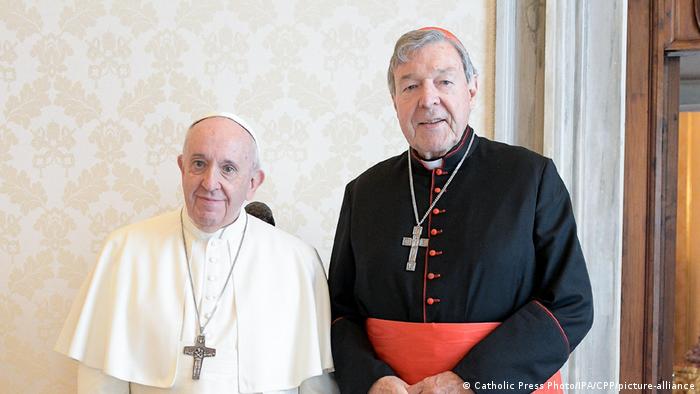 Australian state police said on Friday they were not pursuing an investigation into transfers of money from the Vatican to Australia that Italian media had speculated might be linked to the overturned sex abuse prosecution brought against Cardinal George Pell.

Victoria Police, the force that charged Pell with child sex abuse in 2017, said that Australia's financial crimes watchdog AUSTRAC had not advised them "of any suspicious activity related to these transactions."

"In the absence of any other evidence or intelligence, Victoria Police has noted the advice from AUSTRAC. We are not at this time conducting any further investigation," a police statement said.

The move casts doubt on speculations in recent weeks by the Italian press that the Vatican was investigating whether a rival of Pell's at the Holy See had wired €700,000 ($823,000) in Vatican money to Australia to pay Pell's accuser. Reports named Cardinal Angelo Becciu as the suspected source of the transfers but provided no evidence for the claims. Becciu's lawyer has vehemently denied the allegations.

Becciu, who is thought to have been fired from his position as the number two in the Secretariat of State in September over embezzlement allegations, is known to have clashed with Pell over the latter's financial clean-up efforts as Vatican finance minister. Pell was hired by Pope Francis in 2014 to put the Vatican's sometimes murky financial dealings into order.

Pell was acquitted by Australia's High Court in April after initially being convicted by a Victorian court on charges of molesting two choirboys in Melbourne while archbishop in the 1990s.

Pell returned to the Vatican at the end of September, just days after Becciu's departure, and held a meeting with the pope on October 12. He has said he wants to live in Sydney.

In a further development, newspaper The Australian reported on Thursday that Vatican investigators were looking into four other money transfers to Australia, amounting to more than €1.05 million, between February 2017 and June 2018. However, the paper gave no sources for its information.

Mariendonk Abbey: A shortage of nuns