Pope Francis has arrived in New York, welcomed by a cheering crowd at the start of a visit that will see him address the UN General Assembly. In Washington, he urged lawmakers to do more to fight global injustice. 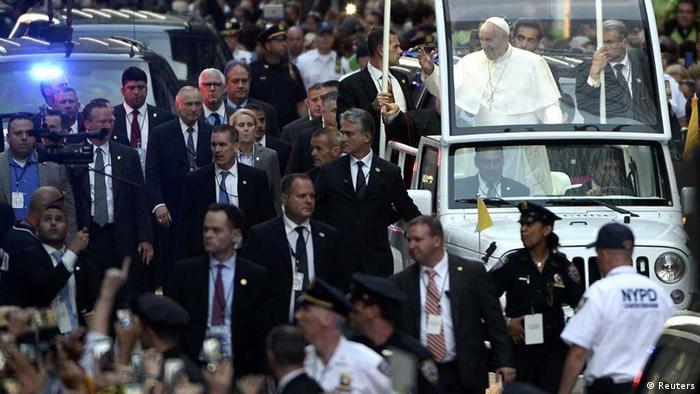 The pope arrived at Downtown Manhattan Heliport near Wall Street after a short flight from John F. Kennedy Airport aboard a military helicopter. He landed there after flying in from Washington.

The pontiff traveled along Fifth Avenue in his "popemobile" amid a massive security operation, to attend a prayer ceremony for some 2,500 people at St Patrick's Cathedral.

During the service, the pope spoke of his solidarity with Muslims after a Mecca pilgrimage stampede in Saudi Arabia, in which more than 700 people died.

"In this moment of prayer, I unite myself with you all in prayer to God, our father, the all-powerful and merciful," he said.

He also addressed the shame of the church over the scandal of sexual abuse by some Catholic priests, and praised the work of nuns in the US, some of whom had been accused of straying from Catholic doctrine by the Vatican under his predecessor.

A packed schedule on Friday will see Francis address world leaders at the United Nations and take part in an interfaith service at the September 11 memorial museum at New York's Ground Zero. As well as celebrating mass at the Madison Square Garden arena, he will also take a processional ride through the city's Central Park.

Pope Francis had earlier addressed American lawmakers in the nation's capital Washington, becoming the first pope to deliver a speech at the US Congress.

"Today I would like not only to address you, but through you the entire people of the United States," the pope said as he began his 50-minute speech.

The former cardinal from Buenos Aires, born Jorge Mario Bergoglio, touched on critical subjects that have come into focus domestically as the US gears up for next year's presidential election. Among them was the subject of migration.

"Our world is facing a refugee crisis of a magnitude not seen since the Second World War," Pope Francis said. "On this continent, too, thousands of persons are led to travel north in search of a better life for themselves and for their loved ones, in search of greater opportunities."

Capital punishment in the frame

Following his comments on migration, the pope continued on with the "Golden Rule" adage, noting that "it also reminds us of our responsibility to protect and defend human life at every stage of its development."

What might at first have seemed to be an introduction to the Catholic Church's stance on abortion, another hot Republican topic in election season, instead morphed into the pontiff calling for the end of capital punishment.

"This conviction has led me, from the beginning of my ministry, to advocate at different levels for the global abolition of the death penalty," Pope Francis said.

In the US, only 19 states have independently decided to ban capital punishment.

Pope Francis also addressed the need to tackle climate change - a concept challenged by many Republican politicians - as well as the human cost of arms trade and fundamentalism.

Contrary to US public perception, Pope Francis is neither left-leaning nor are his stances a radical departure from his predecessors, a Rome-based US theologian tells DW. On one issue, he even collides with both parties. (24.09.2015)

Making his first official visit to the US, Pope Francis has been greeted at an official ceremony at the White House. An estimated 200,000 people gathered in Washington for a glimpse of the pontiff. (23.09.2015)