Speaking at the European Parliament in Strasbourg, France, Pope Francis has urged the EU to remember the aims of its founders. He called on a "united response" to immigration, and "to keep democracy alive." 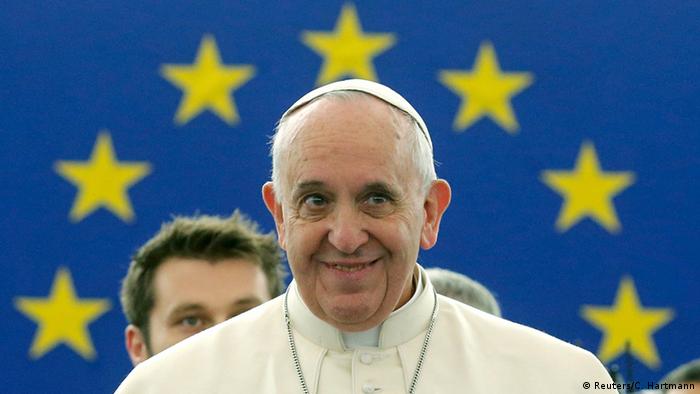 Shortly after arriving in Strasbourg, France, on Tuesday Pope Francis addressed the European Parliament with a strong message for the European Union (EU) to work together and be aware of its own identity.

Opening his speech at the European Parliament, he reflected that since Pope John Paull II's visit more than 25 years ago, "much has changed throughout Europe and the world as a whole."

Despite the expansion of the EU since the end of the Cold War and the Fall of the Berlin Wall, however, Pope Francis said that Europe seems to give the impression of being somewhat "elderly and haggard" and of feeling "less and less a protagonist in a world which frequently regards itself with aloofness, mistrust and…suspicion."

Pope Francis went on, however to deliver a "message of hope and encouragement" which called on Europe to return to the original aims of the founders of the EU, "who envisioned a future based on the capacity to work together in bridging peace and fostering peace and fellowship."

In one of the shortest visits in papal history, the pope spoke of "transcendent human dignity," which he explained as an appeal to human nature, "to our innate capacity to distinguish good from evil."

Francis went on to criticize a Europe which he believed has lost the attraction on great ideas which once inspired, "only to be replaced by the bureaucratic technicalities of its institutions."

The greatest mistake made, however, is "when technology is allowed to take over," said the Pope. The result, he said, is "confusion between ends and means" and the inevitable consequence of a "throwaway culture" and "uncontrolled consumerism."

Referring to the worsening worldwide situation of religious extremism, the pope also called on Europe to "appreciate its religious roots" which he believes will create a Europe which will be "all the more immune to the many forms of extremism spreading in the world."

The European Union's motto of "United in Diversity," the pope said, did not mean "uniformity of political, economic and cultural life or ways of thinking."

"All authentic unity draws from the rich diversities which make it up," he added.

On his first visit to the European institutions, Pope Francis also said the time has come to "promote policies which create employment, but above all "ensure proper working conditions."

There must also be a united response the question of migration, the pope said. "We cannot allow the Mediterranean to become a vast cemetery!" he warned. The pope proposed that Europe needs to "take action against the causes and not only the effects behind immigration."

Bringing his speech to a close, the pope said that Europe "urgently needs to recover its true features in order to grow, as its founders intended, in peace and harmony, since it is not yet free of conflicts."

In his final message, the pope called on the MEPs to work together in building a Europe "which revolves not around the economy, but around the sacredness of the human person."

Following the pontiff's address at the European Parliament on Tuesday, he was also due to attend the European Council. Neither a mass nor lunch was planned however. After less than four hours, the Argentine Pope's airplane was scheduled take off for Rome - leaving behind a clear message for Europe's politicians to unite.

Pope Francis has arrived in Strasbourg, France, to address the EU Parliament. The pontiff is expected to deliver a "clear message" to the continent's politicians. (25.11.2014)

Pope Francis' visit to Europe's institutions on Tuesday will whisk him through the European Parliament and and the Council. It is one of the shortest visits in papal history. (25.11.2014)

Spanish authorities have arrested four Catholic priests accused of child abuse in the southern city of Granada. The country's Interior Ministry says investigations into the case began "some time ago." (24.11.2014)