Pope Francis has met with various Christian and Muslim leaders in Istanbul, on the second day of his trip to Turkey. The Roman Catholic leader prayed alongside a senior Muslim cleric and later called for Christian unity. 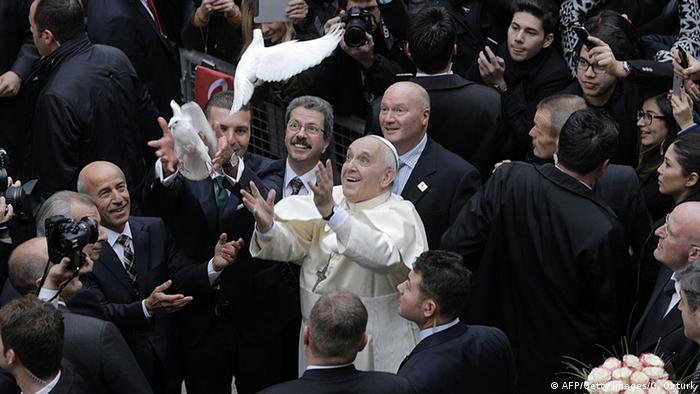 The Pope continued his visit to Turkey Saturday by meeting local leaders of the Armenian, Syrian, Chaldean and Latin Catholic churches.

They form small Christian minorities in an overwhelmingly Sunni Muslim Turkey. Less than one percent of Turkey's 76 million inhabitants are Catholic.

In the afternoon, he celebrated mass in the Cathedral of the Holy Spirit, before a congregation that included Protestants and the spiritual leader of the world's Orthodox community, Ecumenical Patriarch of Constantinople Bartholomew.

The Orthodox leader obliged, kissing Francis' bowed head. The two major branches of Christianity represented by Bartholomew and Francis split in 1054 over differences on the primacy of the papacy, giving particular resonance to Francis' display of deference.

In his sermon, Francis appealed to Christians in Turkey and the world over to unite in the face of discord, calling the diversity of the Christian faith a "tremendous potentiality."

A prayer in the Blue Mosque

That message came after the Pope had visited one of Turkey's most important religious sites, the Blue Mosque, together with Istanbul's Grand Mufti Rahmi Yaran.

Francis and Mufti Rahmi Yaran shared a "special moment of adoration" in the Blue Mosque, the Vatican said

Francis removed his shoes as he entered the Sultan Ahmet mosque, widely known as the Blue Mosque, and was taken through by Yaran.

The two paused for two minutes facing Mecca alongside each other, the pope closing his eyes, bowing his head and clasping his hands as he performed a Muslim prayer.

"We are in need of prayers. The world really needs prayers," Yaran said afterwards.

Vatican spokesman Reverend Federico Lombardi described the act as a "moment of silent adoration" before God.

The pope then toured the Hagia Sophia, formerly the main Byzantine church in what was once Constantinople, before it was turned into a mosque after the Ottoman Turks conquered the city in 1453.

Since 1935, the building has been a secular museum.

The Pope visit to Turkey has drawn strong media attention, given that Turkey borders Iraq and Syria where the self-declaredIslamic State militant group is waging a campaign of persecution against those who do not follow its radical doctrine.

Saturday's visits were conducted amid heavy security, though Pope Francis kept with his custom of traveling in a modest vehicle.

The three-day visit is seen as a test of Francis' ability to build bridges between faiths, as well as establish and strengthen ties with Muslim leaders while condemning attacks on Christians and other religious minorities underway in the Middle East.

The visit is set to culminate on Sunday with a joint celebration of the Feast of St Andrew, the patron saint of the Orthodox world, alongside Bartholomew.

In a gesture of harmony between religions, Pope Francis stood alongside a senior Islamic cleric for a moment of contemplation at Istanbul's most famous mosque. It's the second day of the pope's visit to Turkey. (29.11.2014)

Pope Francis has arrived in Turkey, his first visit to the country. The austere Argentine will be President Recep Tayyip Erdogan's guest of honor in Ankara's controversial new, 1,000-room presidential palace. (28.11.2014)

Iraqi Christians in Germany have high hopes for Pope Francis' visit to their old home 05.03.2021

The pontiff's four-day visit to Iraq was an exceptional spiritual and political event. And his appeal for peace and reconciliation was directed not only at Christians, says DW's Christoph Strack.