Pope Francis used the first hours of his visit to Turkey to call for freedom of religion and expression. He also condemned violence towards minorities in Syria and Iraq, highlighting the plight of Christians there. 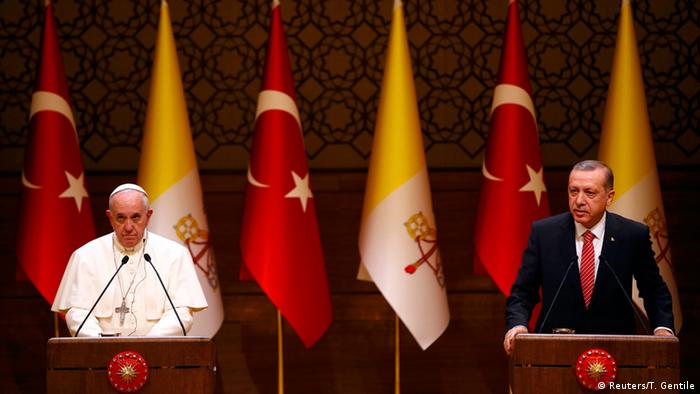 Pope Francis arrived in Ankara early Friday afternoon for what will be a three-day visit to Turkey. He held talks with President Recep Tayyip Erdogan at the grandiose - and hugely controversial - presidential palace, becoming the first foreign dignitary to be received at the newly-constructed 1,000-room building.

The pair held a joint news conference later in the afternoon, where Francis called for "inter-religious dialogue" to help end fundamentalism and terrorism. During his visit, the pope has the somewhat tricky task of condemning violence against Christians and other minorities in the Middle East, while increasing ties with Muslim leaders.

Francis said Muslims, Jews and Christians should share equal rights, adding that the world had a "moral obligation" to assist Turkey as it hosts 1.6 million Syrian refugees, thousands of them Christians.

"Inter-religious and inter-cultural dialogue can make an important contribution ... so that there will be an end to all forms of fundamentalism and terrorism," Francis said.

The 77-year-old pontiff also increased his condemnation of the violence in Syria and Iraq against religious minorities.

"Grave persecutions have taken place in the past and still continue today to the detriment of minorities, especially - though not only - Christians and Yazidis.

"Hundreds of thousands of persons have been forced to abandon their homes and countries in order to survive and remain faithful to their religious beliefs," the pope said.

"What is required is a concerted commitment on the part of all ... (to) enable resources to be directed, not to weaponry, but to the other noble battles worthy of man: the fight against hunger and sickness."

Pope Francis moves on to Istanbul on the weekend. There, he will meet Ecumenical Patriarch Bartholomew, the spiritual head of some 300 million Orthodox Christians worldwide, as part of his efforts to improve ties between the ancient western and eastern wings of Christianity.

During the news conference with Pope Francis on Friday, Erdogan raised his concerns over "rapidly rising" Islamophobia.

"Islamophobia is rising seriously and rapidly. We must work together against the threats weighing on our planet - intolerance, racism and discrimination," Erdogan said.