German President Frank-Walter Steinmeier has met with Pope Francis for the first time since becoming head of state. Among the issues discussed were refugees and the electoral success of the far-right AfD.

German President Steinmeier, who was elected to the largely ceremonial office in February, held a private audience with Pope Francis on Monday in the Vatican.

High on the agenda between the president and the Pope was the refugee crisis. The pontiff hailed Germany's efforts in providing shelter to hundreds of thousands of refugees in the past two years.

Addressing journalists after the meeting, Steinmeier said the pope expressed his hope that "Germany will not turn away from the problem that accompanies us."

The audience lasted for nearly one hour, twice as long as is usual. 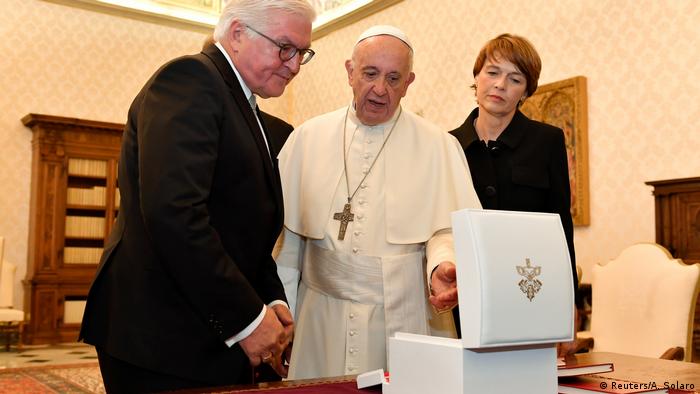 The German president in a speech on Sunday in Rome spoke about the increasing divisions across Europe. He stressed that European citizens' sentiments about certain issues needed to be taken seriously as the EU copes with several crises across the bloc.

"From Britain and Catalonia, to Poland and Greece," it is clear the effect people's emotions can have on politics, Steinmeier said in a speech at the Christuskirche, a Lutheran Evangelical church in the Italian capital. "Emotions and feelings are never secondary."

The visit was Steinmeier's first meeting with the head of the Catholic Church.

The two leaders also discussed Catholic-Protestant relations at a time people are marking the 500-year anniversary of the Reformation.

Steinmeier, a Protestant, has repeatedly sought to promote ecumenism and interreligious dialogue.

"According to my impression the pope is very open to ecumenism," Steinmeier told reporters.

Germany celebrates reunification in Mainz, Steinmeier warns of 'other walls'

President Frank-Walter Steinmeier warned on the Day of German Unity that despite 27 years as a reunified nation, "other walls" have arisen to divide Germany. The public holiday follows on the heels of a testy election. (03.10.2017)

Former US President Barack Obama addressed the church congress saying "we can not hide behind a wall." This year, the 500th anniversary of the Reformation is the featured topic, with many big names making an appearance. (25.05.2017)

How important is Martin Luther today?