The German press has welcomed Frank-Walter Steinmeier with cautious praise for his diplomatic skills and moderate positions. Some may see the new president as "boring," but dullness can be an asset, commentators say. 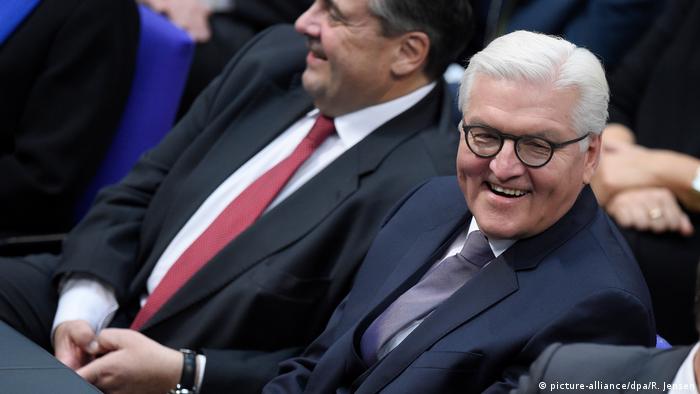 The former foreign minister has been chosen to become the 12th president of Germany. Steinmeier will take office on March 18. (12.02.2017)

Frank-Walter Steinmeier is Germany’s next president. The Social Democrat has been a high-ranking politician for almost 20 years and once set his sights on becoming chancellor – but was defeated by Angela Merkel. (10.02.2017)

Numerous German outlets commented on Sunday's vote, which confirmed former Foreign Minister Frank-Walter Steinmeier as the next German president. The position, while largely ceremonial, remains a key symbol of the state. In his acceptance speech, Steinmeier urged Germans to have courage to listen to each other, and preserve "what we have: freedom and democracy in a united Europe."

The daily "Mittelbayerische Zeitung" lauded the 61-year-old politician, who is set to take office in March.

"In difficult times, it is good to have a president who has a way with words, a person who can listen, as well as speak the truth and give encouragement. [Steinmeier] has proven himself by managing international crises. Now he needs to make sure that Germany sticks together and does not get poisoned by populist nationalism," the article noted. "In a way, Steinmeier is the German answer to Donald Trump."

The daily "Nordwest-Zeitung" also praised the new president as a moderate and a voice of reason in troubled times.

"This world does not need another loudmouth; it needs someone who approaches tough issues thoughtfully. It needs a politician who does not care about pandering, a person who knows how important it is to stand against the anti-European tendencies, based on his experiences as foreign minister. The world needs somebody who unflinchingly faces all the populists out there, regardless of their left-wing or right-wing leanings. This is what Frank-Walter Steinmeier stands for," according to the paper's Monday edition.

"Emder Zeitung" focused on the political calculations that led Steinmeier to his new post. The deals involved key players of Germany's grand coalition, including Chancellor Angela Merkel, her more conservative Christian Social Union partner Horst Seehofer, and her deputy and political rival Sigmar Gabriel, who took over the Foreign Ministry from Steinmeier.

"What is Steinmeier's agenda? He is a consensus candidate by the grace of Merkel and Seehofer. He had to give up his office as foreign minister, so that Sigmar Gabriel ... would keep his place after giving up his run for chancellor. So, Steinmeier is the product of political horse trading, which is very unpopular with the people, and he is the lowest common denominator of the grand coalition. Will that be enough?" the paper asked.

The "Frankfurter Allgemeine Zeitung" also expressed its reservations over Steinmeier's appointment, arguing that political consensus might backfire on the parties.

"The election of Frank-Walter Steinmeier consisted of not having another choice. ... It will not be difficult for him to fulfill the expectations as a 'bipartisan' candidate for president. The shoes of Joachim Gauck and other predecessors are big, but not too big," the paper commented.

Still, Steinmeier will have to contend with the current growth of populism and polarization, as well as people's perceptions of political unity that brought him to the office.

According to commentator Jasper von Altenbockum, "it is exactly this lack of competition, the lack of alternative, that is feeding the need for herding towards the edges and corners, for polarization, for something stronger than the 'mainstream.'"

At the same time, "Süddeutsche Zeitung" greeted Steinmeier with an opinion piece titled "On the Virtue of Boredom," writing that his slow-but-steady style will serve as an asset in the world of half-baked decisions.

"People often describe Steinmeier as boring, but this attribute will not stick to him as harmfully as it would have done a few years earlier," SZ reasoned. "There are times when dullness is a virtue, and in those times politicians need to take a long while to handle issues, instead of the thundering, breathless and rushed policymaking."