Ahead of a visit with the pope, the president has warned of failing to value citizens' sentiments amid crises in the EU. He said reconciliation between Catholics and Protestants could serve as a model forward for Europe. 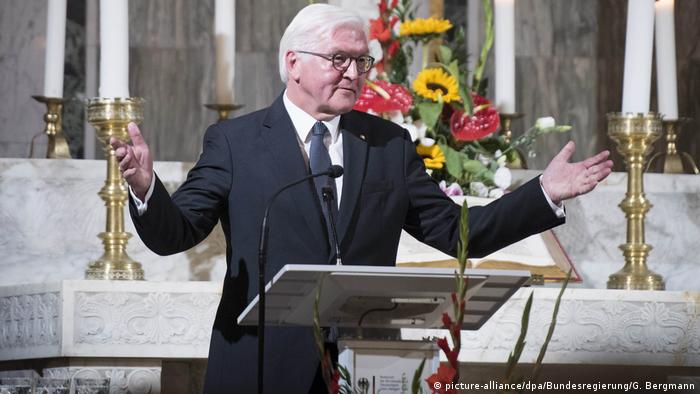 German President Frank-Walter Steinmeier said in Rome on Sunday that European citizens' sentiments about certain issues needed to be taken seriously as the EU copes with several crises across the bloc .

"From Britain and Catalonia, to Poland and Greece," it is clear the effect people's emotions can have on politics, Steinmeier said in a speech at the Christuskirche, a Lutheran Evangelical church in the Italian capital. "Emotions and feelings are never secondary."

Steinmeier, who served as Germany's foreign minister before being elected president, said that citizens' sentiments had been undervalued in the process of European integration. "Such a project can work in the long run only if the heart and soul are included," he added.

In his speech, the German president said the reconciliation between Protestants and Catholics could be used as a model for coexistence in Europe as Germany marks the 500th year anniversary since Martin Luther triggered the Protestant Reformation with his "95 Theses."

A lifelong Protestant, Steinmeier is scheduled to meet with the leader of the Catholic Church, Pope Francis, on Monday, in which he is expected to discuss Europe's challenges, including the ongoing migration crisis, far-right sentiment and growing disillusionment with the European project.

Since 2015 when more than 1 million migrants entered the EU, Francis has advocated for migrants' rights, urging European leaders to show compassion and work together for a bloc-wide solution to the plight of refugees.

After his meeting at the Vatican, Steinmeier is expected to visit the Sant'Egidio Catholic aid organization which helps migrants and the homeless.