The final day of US President Barack Obama's visit to China has resulted in an announcement on emissions targets. The US and China have also agreed to foster cooperation on military and intelligence matters. 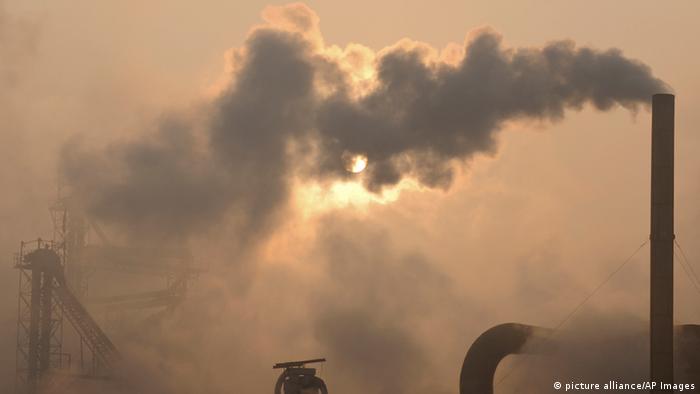 China and the US agreed on Wednesday to new greenhouse emissions targets with China setting a goal for its emissions to peak "around 2030."

This is the first time that the world's two largest polluters have agreed to targets.

US President Barack Obama announced a US target to cut net greenhouse gas emissions by 26 to 28 percent below 2005 levels, by 2025. His Chinese counterpart Xi Jinping did not agree to reduce emissions, but instead said China's aim was to peak CO2 emissions by around 2030, or earlier if possible, and increase non-fossil fuel share of energy to 20 percent by 2030.

"I am proud to announce we have made a historic agreement," said Obama at a joint press conference with Xi following the talks. "It puts us on path to making the deep reductions that climate change scientists say is necessary," he added.

China accounts for around 30 percent of global emissions and Wednesday's announcement shows the country's shift in the way it sees the health-economic-growth equation. Xi said that China and the US were determined to reach an accord in Paris next year.

For the US, the announcement of the targets came months before anyone had expected, ahead of a conference in Paris which will aim to create global targets. While the US targets are sure to be seen as a positive initiative in this regard, he could have trouble drumming up support at home.

The US Senate's Republican leader Mitch McConnell slammed the president's emission plans just after they were announced on Wednesday, AFP news agency reported.

"This unrealistic plan, that the president would dump on his successor, would ensure higher utility rates and far fewer jobs," McConnell said.

China is heavily reliant on coal, which is a big polluter; McConnell's comments were made in reference to the US coal industry, which, as in any other developed country, has seen cutbacks and a loss of jobs as the focus shifts to cleaner energy and mechanization.

The announcements were made at a press conference surrounding formal talks between the leaders of the two countries. Xi also said China and the US should expand areas of cooperation.

"We should expand the areas where we can and should cooperate. China is willing to work with the United States to usher in the future," he said.

Leaders of APEC's 21 countries have agreed to work towards a Beijing-backed free trade agreement on day two of the group's summit. Chinese President Xi has called for strengthened economic integration across the region. (11.11.2014)

US and China strike visa deal at APEC, improve partnership

The world's two largest economies have agreed to grant visas to each other's citizens valid for up to a decade. US President Obama has told leaders at the APEC summit the deal aims to strengthen business ties with China. (10.11.2014)

One thousand companies as well as investment powerhouses such as BlackRock and BT Pension and the Rockefeller and Rothschild funds are pushing for a global carbon deal. UN Global Compact founder Georg Kell tells DW why. (11.11.2014)