Authorites in Germany and the Czech Republic have arrested 15 suspects in Leipzig and Prague after 2.9 metric tons of the chemical chloroephedrine, which is used to make crystal meth, was seized by police. 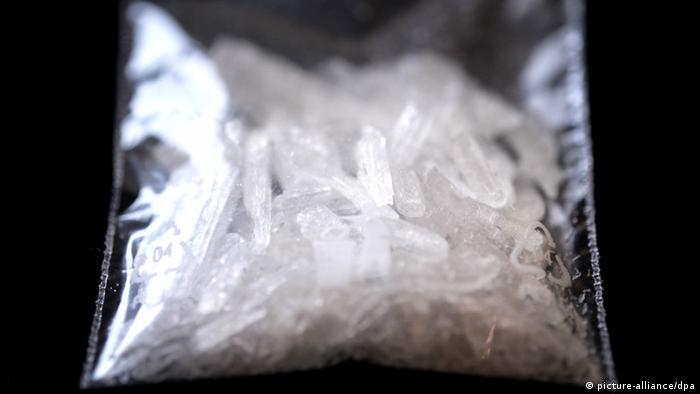 A drugs ring in the eastern German city of Leipzig and the Czech Republic capital of Prague has been busted after 2.9 metric tons of key chemicals used to make crystal meth were seized in November, the German Federal Criminal Police Agency confirmed on Thursday.

The chemical, chloroephedrine, could have been used to produce 2.3 metric tons of crystal meth, with a street value of 184 million euros (230 million dollars).

'Addictive and is extremely dangerous'

Seven suspected members of a drug-producing gang and a suspected customer were arrested in Leipzig following police raids on 19 residential and commercial properties on November 5 and 9. Czech authorities later arrested another seven suspects.

"Crystal is addictive and is extremely dangerous," said Joerg Ziercke, the federal police chief in the southwestern German city of Wiesbaden.

German authorities said the chloroephedrine had been produced elsewhere in Europe and delivered to Germany. From there, it was transported in smaller quantities across the Czech border for use in producing crystal meth.

The presence of crystal meth in Germany is on the rise, particularly in the states of Saxony and Bavaria. On Tuesday, an arrest warrant was issued against two 34 and 39-year-old federal policemen from the eastern German state of Saxony. They are accused of smuggling considerable amounts of crystal meth from the Czech Republic to Germany over a number of months. A third arrest warrant is also due to be issued against a 41-year-old officer.

East and Southeast Asia are the world's largest markets for synthetic drugs. With rising demand for methamphetamines, health is not the only thing to suffer. The drug trade is also slowing development, say experts. (20.08.2014)

The German government's latest report on drug use has pointed to alcohol abuse among young people as one of the most pressing causes of concern. It also said the use of crystal meth was a localized problem. (07.07.2014)

It's the second visit to the Czech Republic for German President Joachim Gauck. During his three-day trip, he might also address the controversial issue of the expulsion of Sudeten Germans. (04.05.2014)