Dozens of right-wing extremists have marched through the western German city of Cologne. Police outnumbered the participants tenfold and had to block hundreds of counter-protesters who attempted to disrupt the march. 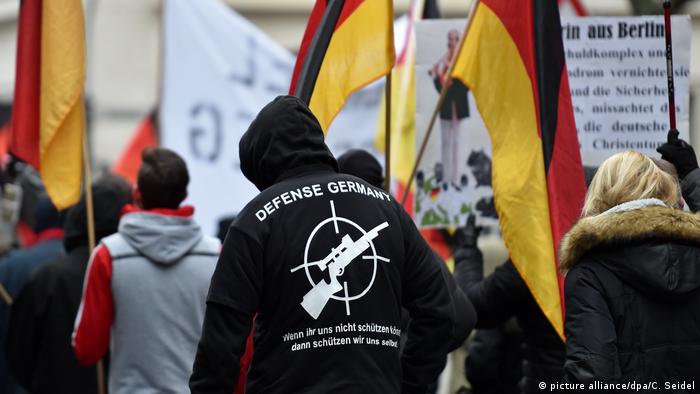 Dozens of supporters of the far-right nationalist party Pro NRW marched through Cologne on Saturday, accompanied by some 1,000 police and several hundred counter-protesters.

Authorities erected barriers, parked police vans on side streets and deployed horse-mounted officers to keep the counter-demonstrators separated from the right-wing protesters.

German news agency DPA reported that around 100 far-right extremists took part in the protest while the local "Kölner Stadt-Anzeiger" newspaper reported around 50 to 60 people participated in the march.

The protest against the sexual assaults which took place in Cologne last New Year's Eve was expected to draw some 400 right-wing extremists. A police spokesperson told news agency EPD that turnout was low probably due to the iced streets and cold weather.

Despite a heavy police presence, around 200 counter-protesters were able to block the far-right protester's march, forcing them to change their route, "Kölner Stadt-Anzeiger" reported.

Some of the counter-demonstrators now face criminal proceedings for attempting to disrupt the march and one was arrested.

Both sides shouted chants and took turns giving each other the middle finger.

At one point, counter-demonstrators chanted, "Nazis out" to which the far-right marchers replied "Nafris out," reported "Kölner Stadt-Anzeiger." 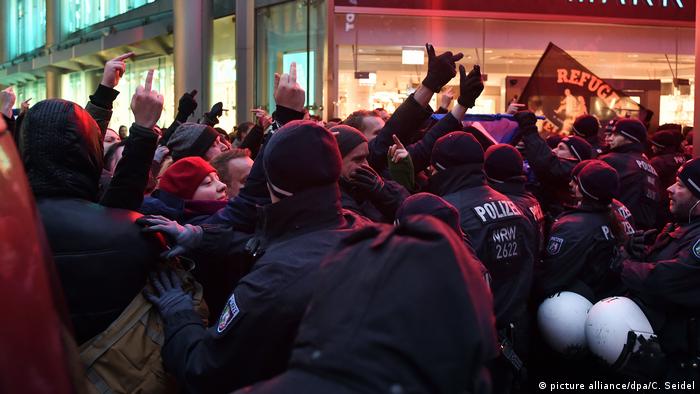 Around 200 counter-demonstrators attempted to disrupt the far-right march

Police in Cologne came under fire again after this year's New Year's Eve celebrations over allegations of racial profiling and using the term "Nafri" to describe groups of North African men who officers targeted for checks during the festivities.

The Pro NRW party, known for its anti-immigrant stance, has since begun selling T-shirts with the word "Nafri" on them to spread intolerance for North Africans in Germany.

During the 2015/2016 New Year's Eve celebrations, hundreds of women were sexually harassed, assaulted and robbed by men who witnesses described as being of Middle Eastern or North African descent.

The assaults sparked public outrage, with many criticizing Cologne police for being unprepared and slow to respond. The assaults also stoked anti-migrant sentiment, particularly within far-right parties.

Right-wing extremists are set to march in the city again next weekend, with police expecting further counter-protests.

A year since the Cologne sex assaults, a debate has broken out after the city's police allegedly "racially profiled" hundreds of North Africans. Authorities have also been criticized for referring to the men as "Nafris." (02.01.2017)

The new financial aid package is aimed at assisting programs for internally displaced people. Ukraine's president has warned that Russia is waging an energy war on Europe. DW rounds up the latest.