A year since the Cologne sex assaults, a debate has broken out after the city's police allegedly "racially profiled" hundreds of North Africans. Authorities have also been criticized for referring to the men as "Nafris." 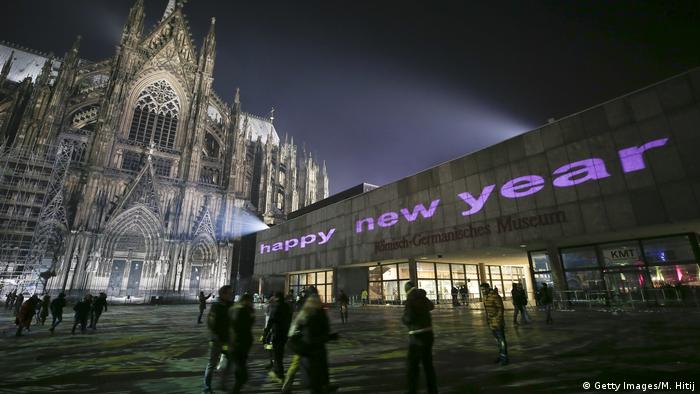 Addressing reporters on Monday, Cologne police chief Jürgen Mathies staunchly defended the actions of the city's police on New Year's Eve, saying he was "glad" that police had been "so well positioned."

Responding to claims of "racial profiling," Mathies said "it was not the appearance, but the behavior of the young men."

"Racial profiling" refers to a procedure in which people are subjected, for example, to special checks or are held based on their skin color. In Cologne on Saturday, police surrounded groups of men that were almost exclusively of North African origin.

Cologne's security services were under pressure on Saturday night to prevent a repeat of the hundreds of sexual assaults and robberies on New Year's Eve 2015. Some 1,000 men - mostly of North African and Middle Eastern origin - unexpectedly descended on the square between Cologne's iconic Gothic cathedral and the main train station on December 31, 2015 and molested hundreds of women.

On Saturday, authorities stepped up security with some 3,000 people officers deployed around the western German city. Come New Year's Day, however, police were under fire for allegedly "racially profiling" hundreds of people of North African descent as they carried out patrols and identification checks.

Green party co-chair Simone Peter said the tighter security in the city clearly limited violence and attacks during this year's celebrations - but she questioned the legality of police tactics.

"It raises the question of proportionality and legality when around 1,000 people were checked and partially detained, based on their appearance alone," Peter told local German paper Rheinische Post.

On Germany's political stage, however, Peter's criticism of Cologne's police has received little support, with many politicians praising authorities on Monday.

CDU General Secretary Peter Tauber said it was hard to believe that the Greens were criticizing the preventive and successful action of the Cologne police as racist.

"This is absurd and unmasks once more the Green multiculturalism and complete lack of reality," he told the Funke media group.

Later on Monday, however, some Green party members distanced themselves from Peters' comments. Greens chairwoman Katrin Göring-Eckardt told western German newspaper Ruhrnachrichten that the police were quick and preventive.

"Hundreds of people were surrounded by police or underwent an ID check, purely on the grounds of their actual or supposed North African origin," Amnesty expert Alexander Bosch said in Berlin on Monday.

Bosch stressed, however, that safeguarding public security was one of the most important tasks of the police. However, he added, despite succeeding in that task Cologne police had ignored the job of protecting people from discrimination.

"Racial profiling is a violation of human rights and not a suitable measure by a legal state to establish public security," Bosch said.

Cologne police also came under fire for their use of the abbreviation "Nafri" when referring to North Africans in a tweet overnight on Saturday.

Christopher Lauer, a former politician with the protest Pirate party and the SPD, described the term as a "sweeping prejudice against an entire group of people based on their appearance."

Vice Chancellor Gabriel stood by police chief Mathies, however, saying that "police have done nothing but describe the reality with their profile 'Nafris / North Africans.'"

Mathies said in hindsight that he thought it was a mistake to use the term on social media, but stood by calling North African men "Nafris" as part of police jargon.

A spokesman for the Federal Ministry of the Interior said, however, that this was "not an official language rule or an official term which we would use."

Having created light installations around the globe, Berlin artist Philipp Geist has his work cut out for him on New Year's Eve in Cologne. Last year's harrowing events in the city on the Rhine grabbed world headlines. (23.12.2016)

France saw a drop in the number of cars set alight this New Year's Eve due to the COVID pandemic. There were 874 cars burned at the end of 2021 compared to 1,316 on New Year's Eve 2019, the Interior Ministry said.