President Duda's government said it was 'inadmissible' to invite Russia's Putin to speak but not the leader of Poland. Duda had wanted a chance to correct what he perceives as "lies" about Poland's role in the Holocaust. 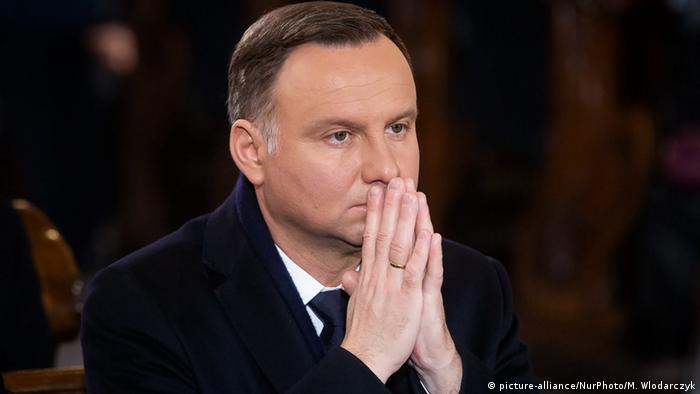 Polish President Andrzej Duda said on Tuesday that he would not attend a Holocaust memorial event in Israel later in January despite being invited, because he had not been invited to speak.

"As the [Polish] president I will not take part in the event that will take place on January 23 in Jerusalem," he said.

Deputy Foreign Minister Pawel Jablonski had criticized the January 23 event at the Yad Vashem center in Jerusalem for asking Russian President Vladimir Putin to speak — among several other world leaders — but not the leader of Poland.

"It is inadmissible, at a conference dedicated to the Holocaust, for Vladimir Putin to be one of the key speakers and for Poland's president not to be able to speak at all,'' Jablonski said on national radio.

Duda said he had wanted to speak in order to counteract perceived "lies" that were being spread about Poland's role in World War II and the Holocaust, particularly recent comments from Putin that partially blamed Warsaw for the outbreak of World War II.

The majority of the German Nazi regime's death and concentration camps were located in what is today Polish territory, and ethnic Poles were among the groups selected for death by Hitler's war machine. About 1.8 million ethnic Poles and 3 million Polish Jews perished in the Holocaust.

In recent years, however, Poland and Israel have at times found themselves at odds over what some see as Warsaw's attempts to rewrite history, for example, regulations that make it more difficult for researchers to investigate how some Poles turned on their Jewish neighbors.

Poland has called off a visit by Israeli officials, claiming they were seeking to force talks on the restitution of Jewish property seized during World War II. (13.05.2019)

The ambassador was spat at in his car near the Polish embassy in Tel Aviv, according to police. Prime Minister Mateusz Morawiecki called the incident a "racist attack;" Israel said it was "a top priority" to investigate. (15.05.2019)