Poland′s churches become sites of protest amid abortion row | Europe | News and current affairs from around the continent | DW | 27.10.2020 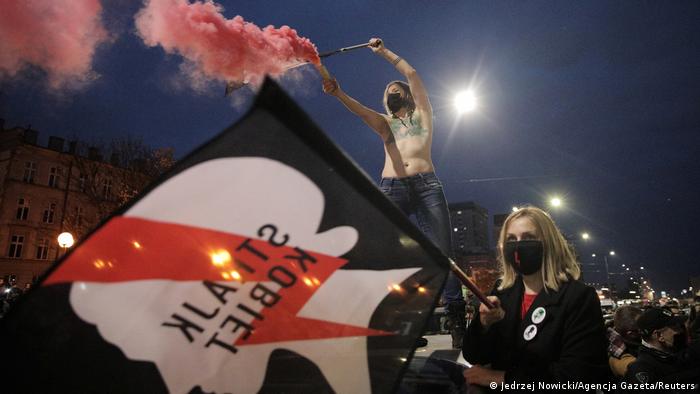 Protests against the tightening of abortion legislation have a long tradition in Poland — but never before has the country seen protesters enter churches and disrupt services. At the weekend, 20 young men and women held a sit-down protest in front of the altar of a church in Poznan, chanting and holding up banners. The disruption was so massive that the priest broke off the Mass.

Protesters holding banners that read "You have blood on your hands," "Women's hell" and "Let us pray for the right to abortion" also tried to enter churches in other cities. Several church buildings, including the cathedral in Warsaw, were spray-painted with slogans such as "Abortion is okay" and "Abortion without borders." In Poznan and a Warsaw suburb, memorials to Pope John Paul II were desecrated — an extraordinary act in view of the fact that he is a kind of national saint for many Polish people even today. 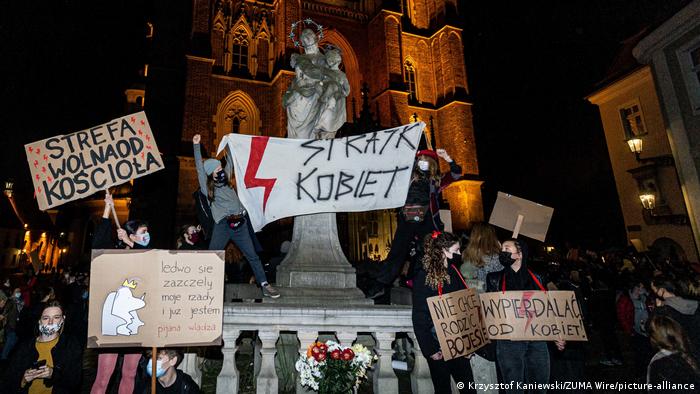 Wroclaw has also seen large protests in front of churches

Every day, thousands of people have been taking to the streets in a wave of protests triggered by a Constitutional Court decision last week to tighten Poland's abortion laws. The move came at the request of a group of right-wing conservative members of parliament who wanted to avoid going through parliament and turned directly to the Constitutional Court instead.

It was to be expected that the constitutional judges would rule in the interests of the government and thus the interests of the Catholic Church. The court has for years been in the hands of judges loyal to the national conservative PiS government who were appointed as part of a judicial reform that the EU has long criticized as undermining democracy in Poland.

Up to now, abortion has been legal in Poland if the mother's health was at risk, in case of severe fetal defects and when a pregnancy was brought about by rape. Under the new law, terminations will be banned even if a fetus has a severe congenital defect.

The judges argued that abortions would violate the protection of life enshrined in the constitution. Fetal defects were the reason given for most of the approximately 1,000 legal abortions performed in Poland every year. The court ruling thus practically outlaws abortion.

It has met with fierce criticism. It is a "shameful political judgment dictated by right-wing fundamentalists," a "war against women," said the Akcja Demokracja (Action Democracy) non-governmental organization. In the past, it had already collected 200,000 signatures against tougher abortion legislation.

Many demonstrators have carried banners proclaiming "This is war."

Ultra-right groups have said they will create a "national guard" to protect the Catholic Church and church buildings from riots.

"The left-wing groups say it is a war. We are taking part in this war," said Robert Bakiewicz, head of a radical nationalist association named Marsz Niepodleglosci (Independence March). 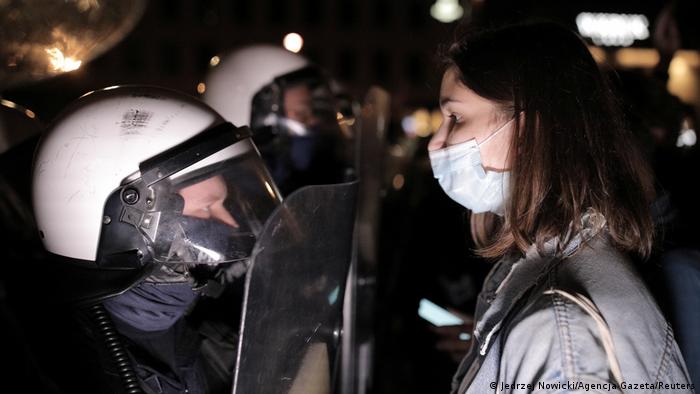 Police have been out in force at the protests

We are "in the middle of a neo-Bolshevik revolution," he said on Monday in front of a church in Warsaw. "The time for peace and tolerance for barbarians is over."

That same church saw clashes between demonstrators and right-wing radicals on Sunday when the latter blocked the entrance to the church and tried to drive protesters from the church steps. On Monday evening, police stood guard at the entrance to another church in Warsaw where hundreds of protesters had gathered with whistles, drums and banners. A group of right-wing radicals stood behind the police officers, also aiming to protect the church. In the future, they say, want to be active everywhere as part of the planned "national guard."

"We will defend every church, every residential area, every town and village," Bakiewicz said.

On Tuesday, the sixth straight day of demonstrations, the protests reached parliament when the left-liberal opposition criticized the harsh court decision and blocked the lectern.

Lawmakers held up banners calling for the legalization of abortion. Some had brought wire coat hangers, which have for years been regarded as a symbol for drastic abortion methods in the country. Security guards surrounded the deputy prime minister and PiS leader, Jaroslaw Kaczynski, as the situation began to get out of hand. The TVP state TV broadcaster described the opposition's protest as "left-wing fascism that is destroying Poland."

Poland, people say, is currently mired in a culture clash between liberalism and conservatism. Agata Bielik-Robson, a Polish philosopher and publicist, argued in an interview with Newsweek Polska that the ruling PiS is looking to find new enemy stereotypes because the last government crisis left it weakened. 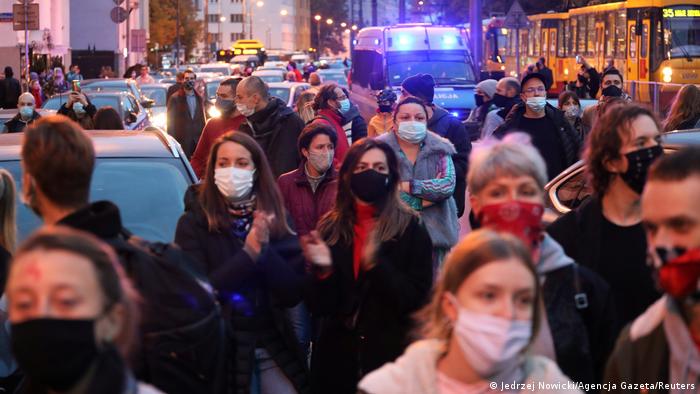 Thousands have been taking to the streets every day

"There are new elements of the culture war that are currently attracting all radical forces," Bielik-Robson said, naming them as the fight against gender theory, against LGBTQ+ and against abortion and against alleged "elements of the civilization of death" that come from the liberal West.

The Constitutional Court's ruling gives the Catholic Church, the ruling PiS and other right-wing conservative parties most of what they have been advocating for many years on the issue of abortion. And this is despite the fact that in opinion polls, the vast majority of Polish society has repeatedly spoken out against tightening abortion legislation.

This article has been adapted from German by Dagmar Breitenbach.