Polish artist Jerzy Kalina has unveiled an unusual sculpture of Saint John Paul II in Warsaw. Meanwhile, thieves had stolen a vial containing a few drops of the late pontiff's blood from an Italian cathedral. 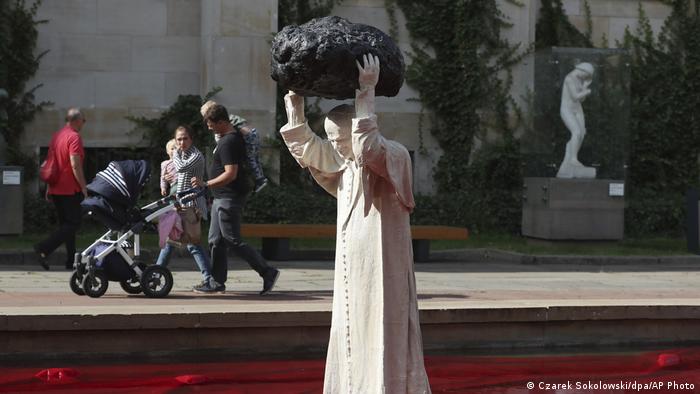 An artist in Poland gave Saint John Paul II an "iconic" makeover on Thursday as it emerged thieves in Italy had stolen a vial containing drops of his blood.

Jerzy Kalina unveiled the new statue of the late Polish pontiff at Warsaw's National Museum, which he has called "Poisoned Source".

The work shows the late pope holding a meteorite high over a pool of red water; it was produced as a riposte to another statue that showed him being crushed by a piece of rock.

Italian artist Maurizio Cattelan's sculpture sparked controversy in Poland when it went on display in 2000 at a Warsaw art gallery. Lawmakers tried to get the work altered, and the gallery's curator was eventually forced to resign as many dubbed the sculpture sacrilegious. 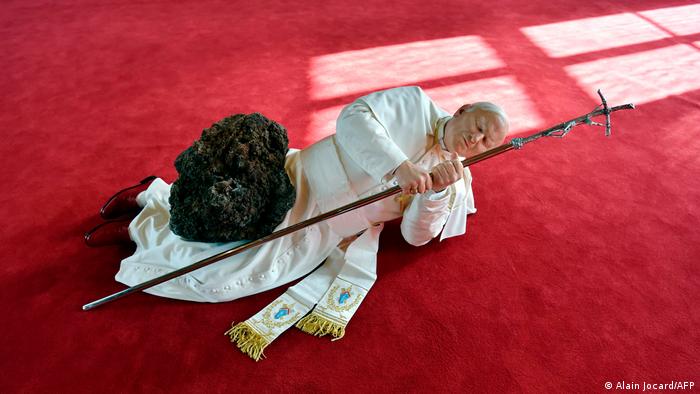 Cattelan's sculpture prompted protests when it wen on display in 2000

John Paul II, who died in 2005, is still widely revered in Poland for his role in inspiring the anti-communist movement.

Kalina’s statue is intended to mark the 100th anniversary of his birth.

The unveiling of Kalina's artwork came as an Italian cathedral announced that thieves had stolen a vial that contains drops of the pontiff's blood.

It was snatched on Wednesday in Spoleto, 130 kilometers (81 miles) northwest of the Italian capital, Rome.

Relics, which observant Catholics venerate as they pray to the saint, are usually pieces of a saint's body or clothing.

It had been due to move to a new church named after John Paul II next month.

Renato Boccardo, the Archbishop of Spoleto, pleaded with the thieves to give vial "back to the cathedral and the faithful."

"It would be the serious thing to do," he said.

In 2016, a cloth with a drop of papal blood went missing from the Cologne Cathedral in Germany, with the authorities unable to recover the relic.