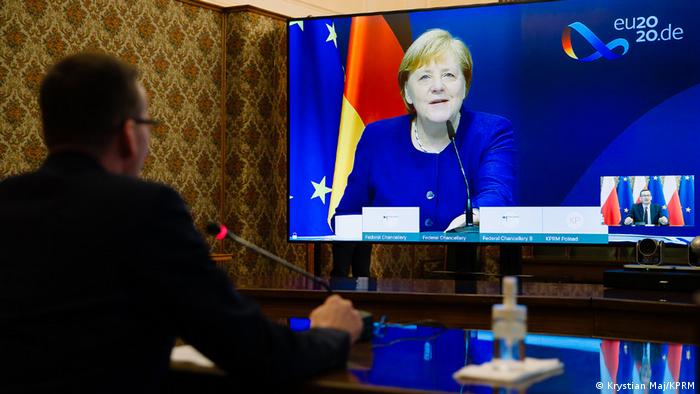 Poland's prime minister on Friday said he had confirmed to German Chancellor Angela Merkel that Warsaw is ready to block the EU's huge budget and recovery package because of its proposed link to democratic standards in member states.

Mateusz Morawiecki wrote on Facebook that he spoke with Merkel, whose country holds the rotating European Union presidency, about the €1.8 trillion ($2.1 trillion) budget for 2021-2027 and the urgently needed coronavirus recovery package that is to be implemented in January.

He said he asked Merkel to find a solution to the deadlock as soon as possible. An EU diplomat described the Polish position as "very difficult" last week.

Poland's Senate Speaker Tomasz Grodzki of the main opposition centrist Civic Platform party, urged the government to drop its veto threat, saying that Poland's standoff with the EU could potentially force it out of the bloc in the future.

"I appeal to the authorities: go back to respecting the rule of law and the conflict with the European Union will resolve itself," said Grodzki in a rare address broadcast by public media.

"If you cause Poland to lose enormous [amounts of] money for further development and reconstruction, if you also lead us out of the European home, history and people will not forgive you for this," he said.

Poland, along with Hungary, oppose a proposed mechanism attached to the budget that would allow for member states to be denied to members who do not meet democratic standards.

The issue is due to be discussed at the bloc's summit, which takes place December 10-11.

Hungary and Poland have both faced legal action from Brussels over the state of their democracies, but say that the EU constitutions do not require any conditionality referring to rule of law in their memberships.

Poland and Hungary are among the EU economies that have been the hardest hit by the coronavirus pandemic, and rely the most on EU support.