Thousands of activists have defied coronavirus restrictions to demonstrate for a ninth straight day against a ruling that further limits abortion in the Catholic country. Groups of hooligans tried to disrupt the event. 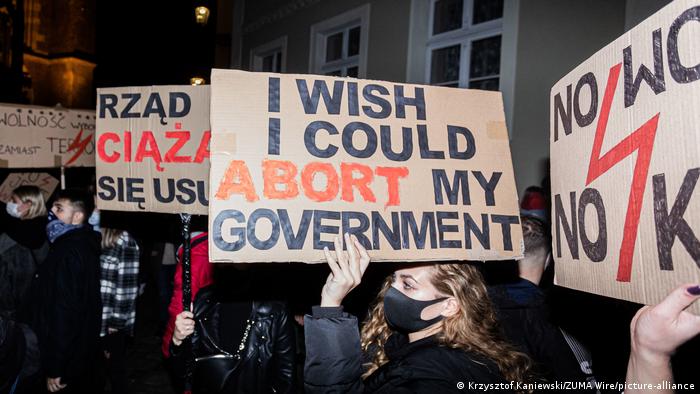 Tens of thousands of protesters took part in demonstrations in Warsaw and other cities across Poland on Friday. Protests have been raging across the Catholic country every day since last Thursday, when the Constitutional Tribunal outlawed abortion in cases of fetal congenital defects — the most common reason for the 1,110 legal abortions recorded by the Polish Health Ministry last year.

In the capital, mostly young demonstrators gathered in front of the headquarters of the government, the ruling party and at one of the city's main squares, before converging in the city center. At the same time, groups of football hooligans fired flares at the crowd in Warsaw. Police said they confiscated flares, gas containers and batons.

Marta Lempart, co-founder of Women's Strike, a non-governmental organization (NGO) and a main demonstration organizer, said: "We're prepared to fight till the end."

Lempart said her group's main goal is to force the resignation of the government. Women's Strike also wants the Constitutional Tribunal's ruling declared invalid due to what is perceived as the court's fealty to the executive branch.

The government has made clear it does not want protesters on the streets, ostensibly for health reasons. Prime Minister Mateusz Morawiecki used Facebook to call on citizens to stay home amid the current spike in new coronavirus infections. Poland reported a record 21,000 new infections on Friday.

"Let us not allow irresponsible behavior from some to harm the elderly, the weakest and the public services engaged in combatting the pandemic," Morawiecki said.

Last week, the government implemented a ban on gatherings of more than five people due to coronavirus. Poland's justice minister has insisted he will press criminal charges against protest organizers for "causing an epidemiological threat."

If found guilty, persons could be jailed for up to eight years.

"If one of us is attacked by the oppressive system of Justice Minister Zbigniew Ziobro, he will have to deal with all of us," said a defiant Klementyna Suchanow of Women's Strike. Organizers have asked protesters to wear masks and keep as much distance between themselves as possible.

DW Warsaw correspondent Olivia Kortas says, demonstrators "do wear masks but obviously these are huge protests and people are close to each other."

"We are doing nothing wrong by protesting and going out on the streets," said Women's Strike co-founder Marta Lempart.

How long will protests continue?

The government has labeled protesters — some of whom have also disrupted Catholic masses, verbally abused priests and graffitied churches — "barbarians," "vandals" and "left-wing fascists."

PiS leader Jaroslaw Kaczynski has been especially sharp in his criticism of the protests and called on his base to "defend Polish churches at any price," echoing calls from far-right groups.

Prior days have seen violence between protesters and far-right groups, so security is expected to be tight Friday. The mostly peaceful demonstrations have voiced outrage at the nationalist PiS party, with protesters blaming it and the Roman Catholic Church for the ruling.

On Thursday, demonstrations across the country drew an estimated 400,000 participants. Protests are expected to continue next week.

What is the legal situation regarding abortion?

Poland already has some of the strictest abortion laws in Europe and protesters say the high court's ruling amounts to a near total ban. Once the law goes on the books, abortion will only be legal in cases of rape, incest and when the life of the mother is in danger.

The ruling Law and Justice Party (PiS) says the court decision will stop "eugenic abortions" but critics and rights group say it will force women to endure non-viable pregnancies.

The PiS government previously attempted to tighten abortion laws in 2016 and 2017 but was met with massive street protests each time.