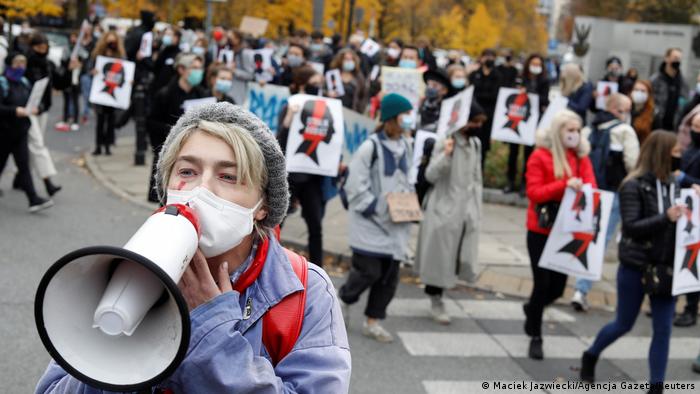 Employees across Poland took part in nationwide strike on Wednesday to protest a controversial top court ruling on abortion.

The Women's Strike, which has been leading the opposition to the bill, called the strike under the slogan: "We are not going to work."

Local media reported on female and male employees of public institutions, universities and private firms, taking a day off work to show solidarity with the protesters.

The strike follows protests and other actions after the Constitutional Tribunal last Thursday banned abortions related to fetal congenital defects.

How is the strike affecting Poland?

The University of Gdansk tweeted photographs of striking students on Wednesday.

Mayors of several cities, including capital city Warsaw and Krakow are also supporting the call for workers to stay off their jobs.

Hanna Zdanowska, the mayor of Lodz, a city in central Poland, took part in the strike, posting a picture on Twitter of an empty office seat.

Jacek Jaskowiak, the mayor of the western city of Poznan on Tuesday tweeted his support for workers who were planning on not turning up to work.

How has the Polish government reacted?

Interior Minister Mariusz Kaminski on Wednesday vowed "decisive action'' by the police "in the face of further attempts of similar acts of aggression and desecration announced by the leaders and organizers of the protests."

Kaminiski was commenting after women on Sunday entered churches to disrupt Masses, confronted priests with obscenities and spray-painted church buildings.

Many who oppose the new anti-abortion ruling in Poland hold the Catholic Church in the country responsible for their role in opposing abortion, in addition to the government.

Jaroslaw Kaczynski, the leader of the ruling conservative Law and Justice Party (PiS) accused protesters of seeking "to destroy Poland."

He called on his party's supporters to defend churches "at any cost."

Since 2015, the PiS-led government has pushed through a number of wide-reaching controversial reforms to media and the judiciary in addition to the abortion ruling. The government has also vocally supported anti-LGTB+ sentiment.

In late September, the European Union criticized Poland together with Hungary for slipping democratic standards. The EU earlier called Poland out on plans for a postal ballot in important presidential elections during the coronavirus pandemic.