Holding placards that read, "You have blood on your hands" and "This is War," protesters rallied near the home of Polish conservative leader Jaroslaw Kaczynski. A top court has banned almost all grounds for abortion. 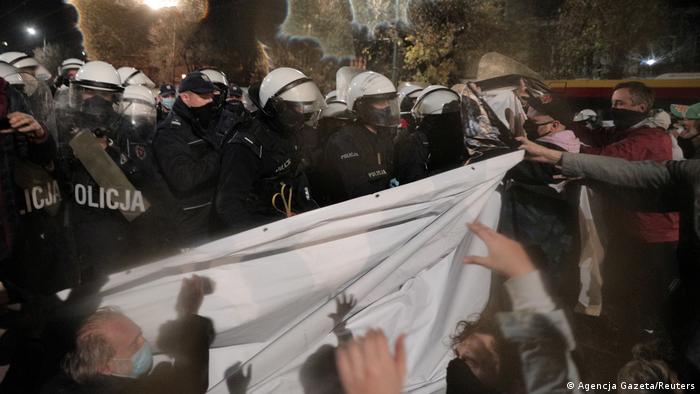 Thousands of protesters across Poland took to the streets on Friday to vent their anger after a top court banned almost all grounds for abortion.

In the Thursday ruling, the Constitutional Tribunal prohibited terminations due to fetal defects, ending the most common of the few legal grounds for abortion in Poland and setting the country further apart from its EU counterparts.

Many of protesters who gathered in cities throughout Poland wore protective masks while defying a coronavirus-related ban on gatherings.

Police vans and units in riot gear were present to guard the Warsaw home of Jaroslaw Kaczynski, the leader of Poland's right-wing ruling party, Law and Justice (PiS). An angry crowd of predominantly young people confronted them in the cordoned off area, chanting "This is war."

'Blood on your hands'

The protesters held placards with "You Have Blood on Your Hands" and "You are Building Women's Hell" emblazoned across them.

Officers used bullhorns to warn people the gathering was illegal due to recently imposed coronavirus restrictions.

Protesters also took to the streets of some of Poland's biggest cities outside the capital, namely Krakow, Wroclaw, Szczecin and Katowice. It was the second night in a row that police were dispatched to Kaczynski's Warsaw residence after a protest also took place there in the immediate aftermath of Thursday's Constitutional Court ruling. Police used tear gas while 15 people were arrested for their actions on Thursday.

Polish opposition parties, the EU's human rights commissioner as well as international human rights organizations condemned the court's decision as violating women's rights. The ruling means pregnancies that endanger a woman's life, as well as those that occur through rape, are the only legal avenues remaining for having an abortion in Poland.

The results of parliamentary polls in Poland come as no surprise. PiS party leader Jaroslaw Kaczynski's policies aimed at "ordinary folks" have made the party a force for years to come, says DW's Bartosz Dudek.